The IMA had on Thursday questioned the scientific basis of the government's protocol based on ayurveda and yoga for the prevention as well as treatment of asymptomatic and mild patients of COVID-19. 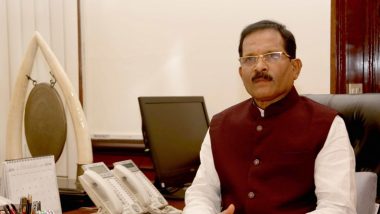 Ghaziabad, October 10: An AYUSH doctors' body on Saturday welcomed the government's COVID-19 treatment protocol based on ayurveda and yoga as it asserted that ayurveda is an age-old, well-established science and "not a placebo", days after the Indian Medical Association (IMA) criticised the Centre's move.

The IMA had on Thursday questioned the scientific basis of the government's protocol based on ayurveda and yoga for the prevention as well as treatment of asymptomatic and mild patients of COVID-19. AYUSH Ministry Body Signs MoU With Amity University to Promote Research in Ayurvedic Sciences.

"IMA demands that the Union Health Minister should come clean on the above posers. If not, he is inflicting a fraud on the nation and gullible patients by calling placebos as drugs," it added.

Union Health Minister Harsh Vardhan had on Tuesday released the protocol for the clinical management of COVID-19, that lists dietary measures, yoga and ayurvedic herbs and formulations such as Ashwagandha and AYUSH-64 for prevention of coronavirus infection and treatment of mild and asymptomatic cases.

Ayurveda is an "age-old, well-established science, rather than a placebo", the Integrated Medical Association (AYUSH), which was formed in 2010 and has chapters in all states, stated in a statement by its national president R P Parasher and founder patron Yuvraj Tyagi.

"The concept of 'national interests' and the 'rights of health of people'  are very much clear to the countrymen under the leadership of Prime Minister Narendra Modi, for which the government does not need any certificate from IMA,” the association said.

"It is the prerogative and duty of the government to take necessary steps to deal with any situation or issue related to public health,” it added. The association of ayurveda, unani, siddha and homoeopathy (AYUSH) practitioners also questioned the trial and testing of allopathic drugs, in response to the IMA questioning the Health Ministry's new protocol on clinical management of COVID-19.

“Whether the allopathic drugs hydroxychloroquine, methylprednisolone or remedesivir were tested for the double blind controlled studies (a randomized clinical trial in which the person does not know if they are receiving the experimental treatment, a standard treatment or a placebo)” it asked.

The association claimed that coronavirus patients were already being treated by ayurveda and yoga in various institutions and the protocol will simply bring uniformity in AYUSH treatment all over the country.

The association also advised the IMA to work jointly with AYUSH doctors during this “hour of crisis” instead of questioning on the efficacy of other streams of medicines.