Union Budget 2022: No Zero and Question Hour in Both Houses of Parliament During Budget Session on January 31, February 1 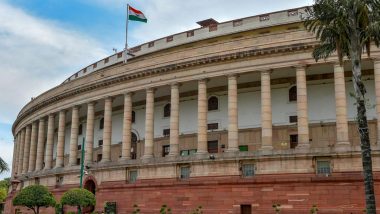 New Delhi, January 29: There will be no Zero Hour and Question Hour in both Houses of Parliament during the first two days of the Budget Session. The Budget Session of Parliament shall begin on January 31 with the address by President Ram Nath Kovind to both Houses in the Central Hall. On February 1, Finance Minister Nirmala Sitharaman will present the Union budget for the year 2022-23. Owing to the developments on these two days, there shall be no Zero and Question Hour for both Houses.

It is further added in the bulletin, "Members are informed that matters of urgent public importance raised during 'Zero Hour' will be taken up from February 2, 2022. However, it is for information of members that, to raise matters of urgent public importance during 'Zero Hour' on Wednesday, February 2, 2022, they may table notices on Tuesday, February 1, 2022, between 10:00 hours and 18:00 hours either online through e-portal or manually in the Parliamentary Notice Office." Union Budget 2022-23: Direct and Indirect Taxes Explained; Here's All You Need To Know.

The Budget Session of Parliament will begin on January 31 at 11 am with the President addressing both houses in a joint session following which the economic survey will be tabled. Finance Minister Nirmala Sitharaman will present the Union Budget at 11 am on February 1 and this time, it will be a Paperless Budget.