Get latest articles and stories on India at LatestLY. Senior Congress leader P Chidambaram on Saturday claimed that there is a "complete breakdown of trust" between the Centre and the states, including those ruled by the Bharatiya Janata Party (BJP). 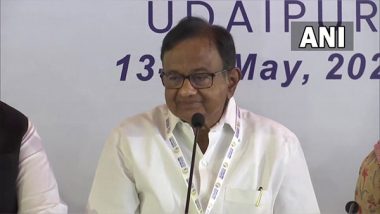 Udaipur (Rajasthan) [India], May 14 (ANI): Senior Congress leader P Chidambaram on Saturday claimed that there is a "complete breakdown of trust" between the Centre and the states, including those ruled by the Bharatiya Janata Party (BJP).

The Congress leader further claimed that the finance ministers of the BJP-ruled states have expressed their concerns on the matter.

"Privately, we know even the BJP finance ministers who have attended the GST council meet have expressed their dismay and concern over this complete breakdown of trust," Chidambaram claimed.

The remarks of the Congress leader came on the second day of the 3-day Chintan Shivir being held by the party in Rajasthan's Udaipur.

Hitting out at the Centre over the repeated calls to bring the diesel and petrol under the regime of the GST, Chidambaram said that "there is no chance of that happening under this government".

"There is no chance at all of the present government making any headway to persuade states to bring petrol and diesel under GST," he said.

Slamming the government for blaming the Ukraine-Russia war for the rise in fuel prices in India, the Congress leader said that it could only have added to the price hike.

"We believe that the GST compensation period must be extended for years," he said.

"There is a complete distrust between the Centre and the states, so there is no chance of taking petrol-diesel under GST," Chidambaram added.

He alleged that the Centre "appears clueless" to deal with the fuel price hike.

"The external situation has added to pressure on the economy. The government appears clueless on the ways to deal with the situation. USD 22 billion has flowed out of the country in the last seven months, foreign exchange reserve has depleted by USD 36 billion," Chidambaram said.

"The state of the Indian economy is of extreme concern, slower growth rate is the hallmark of the present government. Inflation has risen to unexpected levels. The government is fuelling a rise of inflation by high taxes on petrol and diesel and high administered prices," he added. (ANI)