The state government has come up with the Aarogyasri Card to provide financial aid to the needy who are not able to the medical bills. 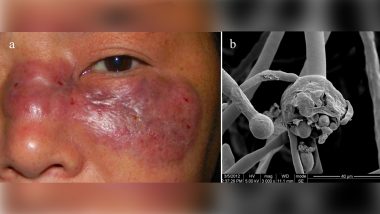 Amaravati, May 17: Amid the surge in COVID-19 infections, the Andhra Pradesh government has added black fungus, also known as mucormycosis, to its Aarogyasri scheme. The state government has come up with the Aarogyasri Card to provide financial aid to the needy who are not able to the medical bills.

The Chief Minister's Office on Monday informed that black fungus has been added to the state's Aarogyasri scheme, and it will now be treated at the Arogyasri empaneled hospitals. Andhra Pradesh Chief Minister Jagan Mohan Reddy has decided to provide a financial package to all the children who have lost both their parents due to COVID. Mucormycosis Causes, Symptoms, Risks, Diagnosis, Prevention & Treatment: Everything About ‘Black Fungus’ Affecting People with Compromised Immune System amid COVID-19 Pandemic.

A fixed deposit will also be made in the name of the child which will last until the child turns 25. According to the official data as of Monday, there are 2,10,436 active cases of COVID-19 in Andhra Pradesh, while the death toll due to infection in the state has mounted to 9,372.

A few cases of black fungus have been reported in the country including Karnataka, Uttarakhand, Telangana, Madhya Pradesh and Bihar. As per the Union Health Ministry, mucormycosis or black fungus is a complication caused by fungal infection. People catch mucormycosis by coming in contact with the fungal spores in the environment. It can also develop on the skin after the fungus enters the skin through a cut, scrape, burn, or other type of skin trauma.

The disease is being detected among patients who are recovering or have recovered from COVID-19. Moreover, anyone who is diabetic and whose immune system is not functioning well needs to be on the guard against this, said the ministry.

It further stated that the disease is caused by a set of micro-organisms known as mucormycetes, which are present naturally in the environment, seen mostly in soil and in decaying organic matter like leaves, compost and piles.