Bharatiya Janata Party National General Secretary and the Incharge of Telangana unit of the party Tarun Chugh on Friday indicated that former state health minister Etela Rajender would be joining the BJP soon. 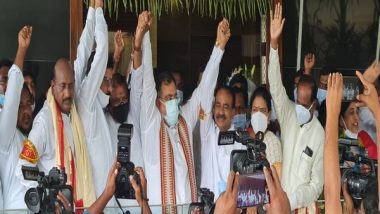 After the meeting with Rajender the Telangana BJP In-charge said, "Etala Rajender has raised his voice against the corrupt, dictatorial and nepotistic politics of TRS-led Telangana government and that is why he is being targeted."

"The fight is between the self-respect of Telangana state and the dictatorial rule of Chief Minister KCR in Telangana. Etela Rajender being in the party raised his voice against the nepotism politics in the TRS party and against the corruption happening in the party. Etela's voice had always been suppressed in the party," he told media personnel here.

Etela Rajender had on June 4 resigned from TRS citing differences with the party. He was removed from his post as state Health Minister over the allegations of land grabbing last month.

Rajender stated that differences between him and Telangana Chief Minister K Chandrashekar Rao had been going on for the last five years. He said, "I have been insulted on several occasions. I am a leader in Telangana and not a slave to the TRS Party."