Get latest articles and stories on India at LatestLY. After the Bharatiya Janata Party state president VD Sharma accused the senior Congress leader and former chief minister Digvijay Singh of giving protection to the accused in the Guna police personnel death case, Singh demanded a speedy and fair investigation in the case. 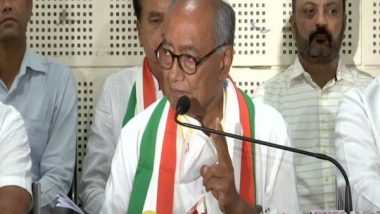 The BJP state president said, "According to local people, criminals are being given open protection by Digvijay Singh in Budhaulia village adjoining Raghogarh fort. The possession of a huge quantity of weapons by the criminals and their relationship with Digvijay Singh needs to be investigated."

In response, Digvijay Singh said that he agrees with VD Sharma that the incident should be investigated thoroughly and strict actions should be taken against the accused.

"There is a BJP government both at the Centre and the State. I demand them to investigate the case and punish those who are guilty of committing this heinous crime, as severely as possible," Digvijay said.

Singh also expressed grief over the incident and said, "My deepest sympathies are with the family of three innocent and responsible police personnel who sacrificed their lives."

Chief Minister Shivraj Singh Chouhan announced an ex-gratia of Rs 1 crore each and a government job to the kin of the family of three policemen, who were shot dead by poachers.

Following the shootout, state Home Minister Narottam Mishra assured of immediate arrest of the culprits.He said that the police had surrounded the criminals based on a tip-off received, following which there was a gunfight. Three policemen including an SI lost their lives in the line of duty.

The Minister added that five heads and two carcasses of deer along with a carcass of a peacock were recovered. (ANI)