Assam Chief Minister Himanta Biswa Sarma has taken a swipe at Congress over its dwindling fortunes in the electoral polls under the leadership of Gandhis over the last eight years and said "Gandhi family are expired drugs". 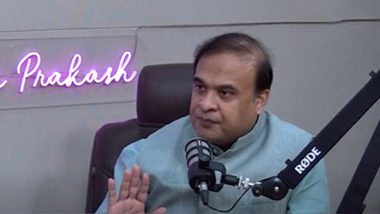 New Delhi, September 29: Assam Chief Minister Himanta Biswa Sarma has taken a swipe at Congress over its dwindling fortunes in the electoral polls under the leadership of Gandhis over the last eight years and said "Gandhi family are expired drugs".

In an interview with ANI, Sarma said that BJP-led NDA will return to power with "much more greater majority in the 2024 Lok Sabha elections under the leadership of Prime Minister Narendra Modi. Congress President Election: ‘Nehru-Gandhi Family Will Remain Our Leader, Whoever Becomes Party President Will Work Under Them’, Says Digvijaya Singh.

He said Congress still feels that it is the ruling party and that BJP has "usurped power" from it. Sarma said normal forums of democracy are available to opposition parties in India and there is an inbuilt system.

He said that the notion among sections of bureaucracy that Congress is the natural party of governance should be demolished. "Then you will have proper democracy," he said. He accused Congress of misusing Article 356 to dismiss opposition governments when it was in power. "Narendra Modi is challenger to that one-party system. He is challenging the hegemony of Congress," he said.

Sarma, who left Congress after over two decades to join the BJP, said "after Congress is wiped out, a new political party will emerge which will come with sense" that they are the opposition party and normal power play in India will start.

He said that there still can be one-party rule but "one family rule" was created. "You want to create that institution where the entire India is run from 10 Janpath. That institution, you will not get back," he said. Congress has fared poorly in the two Lok Sabha elections and most assembly polls held after 2014. Several Congress leaders have left the party and it is now battling a political crisis in Rajasthan amid its presidential election and Bharat Jodo Yatra led by Rahul Gandhi.