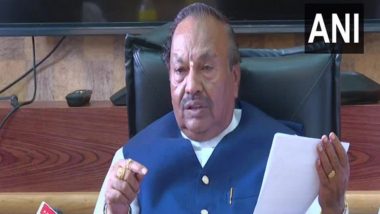 Shivamogga, August 14: Karnataka Minister KS Eshwarappa on Friday said that the state government is planning to ban "silly" Social Democratic Party of India (SDPI) and confiscating properties of those involved in Bengaluru violence. He claimed that terrorism has been neutralised under the Bharatiya Janata Party (BJP) government.

"SDPI a silly organisation. We have neutralized the terrorism under BJP government. We are thinking to ban SDPI. These two decisions will be taken shortly. One is, those involved in the violence here, their property will be confiscated and another decision is banning the SDPI," said Eshwarappa. "These two matters will be discussed in the cabinet meet, which is scheduled to be held on August 20," he added. Bengaluru Violence: What Triggered the Riots in Which 3 People Were Killed And Over 60 Policemen Were Injured? Here's What We Know.

Among those who were arrested include Kaleem Pasha, the husband of Bruhat Bengaluru Mahanagara Palike (BBMP) corporator from Nagwara ward - Irshad Begum. The police have arrested 206 people so far in connection with the violence, Patil said. Bengaluru Violence: Karnataka CM BS Yediyurappa Says 'Govt Has Taken Steps to Curb Situation' After Unrest Breaks Out Over Inciting Social Media Post.

Three people were killed and several others suffered injuries after violence erupted in the eastern part of the city on Tuesday night over a social media post made allegedly by Congress MLA Srinivas Murthy's nephew Naveen.

Accused Naveen has also been arrested now. Karnataka Home Minister Basavaraj Bommai has said that a district magistrate will hold an inquiry into the violence.