Karnataka Pradesh Congress Committee President DK Shivakumar, former Chief Minister Siddaramaiah and other prominent leaders were arrested on Friday in Bengaluru while they were protesting against the steep hike in fuel prices. 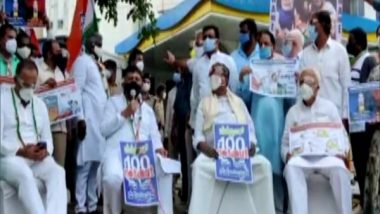 Visuals from the protest in Bengaluru. (Photo/ANI)

Protests were held across the state at 800 petrol pumps.

"100 Not Out" remained a top trend on social media as more than 25,000 people voiced their opinion supporting the Congress in the form of videos, tweets and memes on various platforms.

While speaking to reporters in Bengaluru, Shivakumar said that fuel prices had been hiked 48 times this year and called it "daylight robbery".

"The BJP raised petrol prices 48 times in 2021. How many salary hikes did the middle class get? By how much was the minimum wage raised? By how much were NREGA wages increased? How many times were farmers' MSPs increased? This is daylight robbery by the BJP," he said.

He further said that every citizen is suffering from this burden and said that the BJP government was pick-pocketing everyone in the name of tax on petrol. The BJP government has collected more than Rs 20.60 lakh crore from taxes on petrol in the last seven years, he added.

"Speak out before it's too late," Shivakumar said in a tweet appealing to the people to protest against the steep fuel price hike.

Siddaramaiah, meanwhile, said that the Centre was 'rubbing salt on the injuries' of common man amid the 'economic meltdown' caused by the ongoing Covid pandemic.

"Is this government not ashamed of sucking the blood of people? This government is acting like a leech. They have made people's lives hell. Narendra Modi is continuously lying and deceiving people by giving false information," he said.

Today is the first of Congress' five-day protests under the 'Not Out 100' campaign against the rising fuel prices.

Protests were held in all the District Head Quarters on Friday. The party will hold protests at all the Taluk Headquarters and Hobli Headquarters on Sunday, in all Gram Panchayats on Monday, and on all other major locations of Karnataka on Tuesday.