Get latest articles and stories on India at LatestLY. Stepping up the Bharatiya Janata party's campaign for the Telangana Assembly elections slated for next year, Union Home Minister Amit Shah said that the 'Praja Sangrama Yatra' of the party is to "change the Nizam (ruler) of Hyderabad". 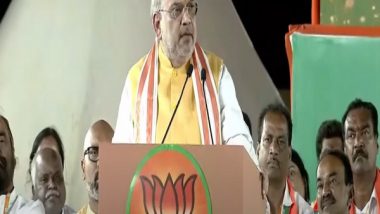 Rangareddy (Telangana) [India], May 15 (ANI): Stepping up the Bharatiya Janata party's campaign for the Telangana Assembly elections slated for next year, Union Home Minister Amit Shah said that the 'Praja Sangrama Yatra' of the party is to "change the Nizam (ruler) of Hyderabad".

Shah hit out at the ruling Telangana Rashtra Samithi (TRS) government in the state, and claimed that "not a single promise made before the previous polls has been fulfilled by Chief Minister K Chandrashekar Rao".

Shah's remarks on Saturday came while addressing a public meeting on the concluding day of the month-long 'Praja Sangrama Yatra' Phase-2 in Telangana. Shah was on a day-long visit to the state.

"This yatra is not for ousting one party and bringing another to power, or making somebody a chief minister, or forming a BJP government in a state, but to change the Nizam of Hyderabad. This yatra is against those who are sitting on the laps of the representatives of the rulers," the Home Minister said.

Shah also hit out at dynasty politics and said "this yatra is against the mindset that promotes nepotism". This yatra is against uprooting the TRS party that does the corruption of millions and billions and breaks promises made to the Dalits and tribals, said Shah while also stating that the party's campaign is to uproot Chief Minister KCR from power.

Notably, the first phase of the 'yatra', which began in August 2021, ran for 36 days, covering 19 Assembly constituencies in eight districts last year, starting from Hyderabad and going through Rangareddy, Vikarabad, Sangareddy, Medak, Kamareddy, Sircilla and Siddipet.

While enumerating the list of promises not fulfilled by CM KCR after assuming power, Shah said that he has not seen "such a corrupt government in his entire life".

"You had promised to waive off loans of the farmers up to Rs 1 lakh. It was not waived off. You had promised two-bedroom houses to the people. Let alone giving houses, you did not implement the Pradhan Mantri Awas Yojna. He has not fulfilled even one of his promises. I have not seen such a corrupt government in my entire life," Shah said.

The Home Minister called upon the youth to "uproot" the TRS-led government "to teach them the lessons that they should not break promises".

"KCR does not go to the state secretariat. Some occultist has told him that if he goes there, he would lose power. There is no need for an occultist to predict his losing power, the youth of Telangana will uproot your government because you had promised unemployment allowance. Did you get it? The youth of Telangana should come forward and uproot this government," Shah said.

Taking a dig at KCR, he said that the control of the vehicle, which is the symbol of the TRS, is in the hands of All India Majlis-e-Ittehadul Muslimeen chief Asaduddin Owaisi.

"The sign of the TRS party is a vehicle. The steering of the vehicle is in the hands of Owaisi," Shah said.

Shah further said that KCR has done nothing "except change the names" of the schemes rolled out by the Centre.

"PM Modi has done a lot for the development of the state and welfare of the people of Telangana. Chandrashekhar Rao's government of Telangana does nothing except change the names of PM Modi's schemes," he said. (ANI)