Get latest articles and stories on India at LatestLY. Days after a Muslim cleric opposed a minor girl's presence at a felicitation ceremony, Kerala BJP President K Surendran slammed the CPI (M) led State Government and said that Kerala is rapidly becoming "Talibanized". 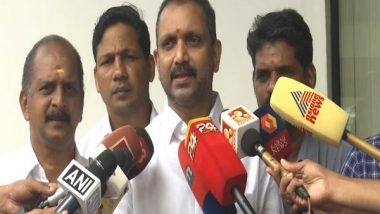 In a viral video from Kerala, a Muslim cleric can be seen opposing a minor girl's presence at a felicitation ceremony. Here, a class 10 student named Mashida was called on stage to receive the prize for topping her class, wherein the cleric objected to her presence. Rebuking the other officials present at the event, the cleric remarked that if a girl is being given the honour, her parents or guardians should be called on stage instead.

Speaking on this development, Surendran on Thursday said to reporters, "Kerala Chief Minister Pinarayi Vijayan has not uttered a single word after a student was publicly insulted at a religious organization. The case was not taken up. The Child Rights Commission is also keeping silent. What would have happened in Kerala if it had been elsewhere? Kerala is rapidly becoming Talibanized."

"Kerala is moving towards the ideology followed by Taliban with the help and knowledge of the Chief Minister. The Chief Minister and the government are helping such terrorist forces. The Chief Minister's Department is carrying out terrorism-based activities in Kerala. The Chief Minister has double standards of working here. CM is protecting all the interests of a particular section. The other category is being abused. Christians are also feeling like a minority here." (ANI)