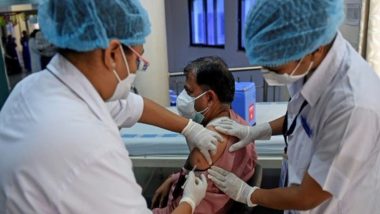 New Delhi, February 26: The cumulative number of COVID-19 vaccine doses administered to healthcare and frontline workers has crossed 1.37 crore in the country, the Union Health Ministry said on Friday.

"Total 2,84,297 vaccine doses were given till 6 pm on Friday, the 42nd day of the nationwide COVID-19 vaccination. Out of which, 1,13,208 beneficiaries were vaccinated for 1st dose and 1,71,089 HCWs received 2nd dose of vaccine as per the provisional report," the ministry said, adding that final reports for the day would be completed by late night. COVID-19 Vaccination for Senior Citizens, Those with Co-Morbidities Above 45 Years Can Now Register On Co-WIN 2.0 Portal.

It said 10,405 sessions were held till 6 pm, and that all states and union territories conducted COVID-19 vaccinations during the day. On February 26, orientation of administrators and programme managers of all states and UTs for Co-WIN 2.0 and the next phase of COVID-19 vaccination for people aged 60 years and above and those aged 45 and above but with co-morbidities has been done, the ministry said.

It said that six states and UTs have vaccinated more than 75 per cent of the registered HCWs and FLWs for the first dose. These are Dadra and Nagar Haveli, Gujarat, Lakshadweep, Madhya Pradesh, Rajasthan and Tripura.

Seven states have vaccinated more than 80 per cent of the registered HCWs for the first dose. These are Bihar, Odisha, Jharkhand, Chhattisgarh, Karnataka, Himachal Pradesh and Uttarakhand, the ministry said.

On the other hand, four states and UTs have reported less than 50 per cent coverage of registered HCWs for the first dose, it said. These are Nagaland, Punjab, Chandigarh and Puducherry.

Further, seven states have registered more than 60 per cent coverage for the first dose among FLWs. These are Odisha, Himachal Pradesh, Chhattisgarh, Uttarakhand, Jharkhand, Ladakh and Jammu and Kashmir, the ministry said.

It stated that eight states and UTs have reported less than 30 per cent coverage of registered FLWs for the first dose. These are Arunachal Pradesh, Manipur, Tamil Nadu, Andaman and Nicobar Islands, Assam, Meghalaya, Kerala and Puducherry. Five states that recorded the highest number of vaccinations on Friday are UP (73,434), West Bengal (38,522), Gujarat (35,540), Karnataka (21,459) and Maharashtra (18,190).

Fifty-one people have been hospitalised so far. The number makes up 0.0004 per cent of the total vaccinations, the ministry said. Of these 51 cases, 27 were discharged after treatment, while 23 persons died and one is under treatment. In the last 24 hours, no new event of hospitalisation has been reported, it added.

Forty-six deaths have been recorded till date, which comprise 0.0004 per cent of the total COVID-19 vaccinations. Twenty-three persons died in hospitals while as many deaths are recorded outside hospitals. COVID-19 Vaccination Sessions Not Scheduled on February 27, 28 Due to Transition from Co-Win 1.0 to 2.0.

"No case of serious/severe AEFI/Death is attributable to vaccination, till date," the ministry said. In the last 24 hours, one new death has been reported. A 41-year-old man, who was a resident of Bhojpur, Bihar, died 15 days after his vaccination. The suspected reason for his death is Myocardial Infarction, the ministry said.