Get latest articles and stories on India at LatestLY. A Delhi court on Tuesday granted one-day police custody of Manish Lakra, Harish Goyal and Varun Goyal in the Mundka fire case. Delhi police sought custody for taking blood samples of Goyals and for the recovery of documents. 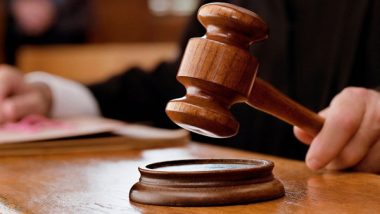 New Delhi, May 17: A Delhi court on Tuesday granted one-day police custody of Manish Lakra, Harish Goyal and Varun Goyal in the Mundka fire case. Delhi police sought custody for taking blood samples of Goyals and for the recovery of documents. Manish Lakra was produced in court after two days of Police custody. Two other accused Harish Goyal and Varun Goyal were produced from Judicial Custody.

Metropolitan magistrate Udita Jain Garg granted one-day police custody to interrogate the accused for recovery of documents and other evidence. An application seeking three days of police remand of all the accused was moved by Inspector Gulshan Nagpal. He submitted that the Police found 27 dead bodies out of which 8 were identified. The remaining bodies are to be identified for which DNA profiling would be done. Delhi Fire: 27 Killed, 12 Injured in Mundka Blaze, Rescue Op Still Underway; Death Toll Likely To Go Up.

He submitted that for this purpose, we required the list of employees who were working in the factory prior to the fire incident. This list is in the possession of Harish and Varun Goyal. Many workers were from other states. For this reason, their custody is also required. Inspector Nagpal further submitted that the father of Harish and Varun also died in the suffocation. His identification is also to be done. For taking the blood samples of Goyals, their custody is required. Other necessary documents are also in the custody of the Goyals.

The counsel appeared on behalf of Goyals and opposed their police custody remand. They submitted that on earlier occasions, the custody was sought and granted for the arrest of the landlord. He is already in police custody. Now the custody of Goyals is not required as all the documents have been handed over by his CA. The counsel also submitted that the magisterial inquiry has been called by the Chief Minister, Delhi and it is going on. In this situation, police custody is not required. Delhi Mundka Fire: 'Manish Lakra Was Inside the Building When Fire Broke Out', Says Delhi Police.

Delhi Police objected saying that they are tenants and there is a rent agreement. The CA has only handed over the photocopies of emails and originals are still in the possession of Goyals. They are to be confronted.

A massive fire broke out last week in a factory in Mundka. In the incident, 27 people had died.