Odisha Director General of Police (DGP) has ordered an inquiry into an incident where a journalist in the state's Balasore district was seen chained to a bed of the hospital where he was admitted after being allegedly assaulted in police custody. 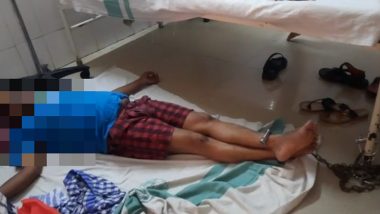 Balasore (Odisha) [India], April 9: Odisha Director General of Police (DGP) has ordered an inquiry into an incident where a journalist in the state's Balasore district was seen chained to a bed of the hospital where he was admitted after being allegedly assaulted in police custody.

Visuals of the incident showing TV journalist Loknath Dalei lying on the hospital floor with his legs cuffed to a bed was shared widely on social media.

The incident triggered a massive outcry which led to police ordering a probe by a Deputy superintendent of police (DSP)-rank officer into the incident.

The journalist claimed he was thrashed because he reported on alleged corruption in Nilgiri police station area in Balasore district. Dalei claimed that he had an argument with a home guard at Nilgiri market after their vehicles collided on April 4, after which he was on April 5 asked to come to the Nilgiri police station, where he alleged that he was thrashed by the inspector-in-charge Droupadi Das and his mobile phone was snatched away.

A Sahadevan Dies: Senior Journalist and Film Critic Passes Away Due to Massive Heart Attack in Kerala

The journalist alleged that he fell unconscious due to police beating and admitted to Balasore District Hospital, where his leg was cuffed with his bed by a policeman guarding him.

The incident came to light on Thursday after a video showing him leg-cuffed went viral on social media and was reported by news channels. His leg cuff was removed and he was later released from the hospital after the news spread.

Balasore SP S S Mishra informed that matter will be investigated by a DSP-rank officer, and strict action will be taken against those found guilty.

The Union minister Dharmendra Pradhan took to Twitter to express his concern and said: "In a democracy, dissenting opinions have to be respected. But beating a journalist like a professional criminal is not acceptable in a healthy society." (ANI)