Get latest articles and stories on India at LatestLY. Union Home Minister Amit Shah kick-started the Bharatiya Janata Party's (BJP) election campaign for western Uttar Pradesh from Kairana on Saturday. He said the people of Western Uttar Pradesh's confidence in the party indicates that BJP will cross the 300 margin in the upcoming state Assembly polls. 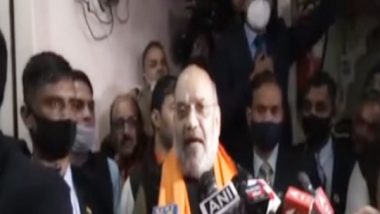 Briefing the mediapersons, the Union Home Minister said, "There was a government that used to work for only one community. To maintain the law and order situation and to put an end to appeasement politics in Uttar Pradesh, the BJP government under the leadership of Prime Minister Narendra Modi and Chief Minister Yogi Adityanath is to be formed with a thumping majority."

"The people of Kairana were migrating before. Today when I visited Kairana, people said they have returned due to the development work of Modi ji and Yogi ji. The traders said they are running their businesses peacefully due to the law and order situation maintained by the BJP government. With the confidence seen among the people of Uttar Pradesh, I feel that in the coming days, Uttar Pradesh is going to become the most developed state of India."