Get latest articles and stories on India at LatestLY. Prime Minister Narendra Modi is scheduled to inaugurate the Golden Jubilee celebrations of the Agradoot group of newspapers on Wednesday via video conferencing. 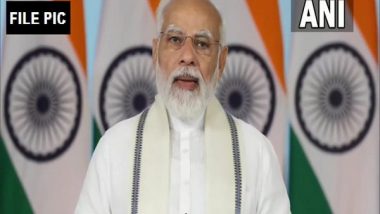 According to Prime Minister's Office (PMO), Assam Chief Minister Himanta Biswa Sarma, who is the chief patron of Agradoot's Golden jubilee celebration committee, will also be present on the occasion.

Agradoot was started as an Assamese bi-weekly. It was established by Kanak Sen Deka, a senior journalist of Assam.

In 1995, Dainik Agradoot, a daily newspaper, was started and it has developed as a trusted and influential voice of Assam. (ANI)