Madhya Pradesh Assembly Speaker's personal secretary Avdhesh Tiwari was removed from his post for alleged misuse of power to influence result in favour of his wife in panchayat election. 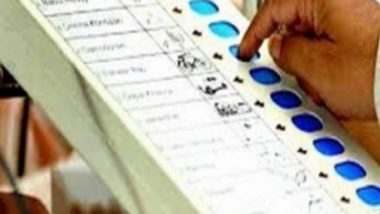 Bhopal, July 5: Madhya Pradesh Assembly Speaker's personal secretary Avdhesh Tiwari was removed from his post for alleged misuse of power to influence result in favour of his wife in panchayat election.

Tiwari's wife Krishnavati was one of the candidates for sarpanch post in Sura gram panchayat (under Gangeo block) in Rewa district.  Madhya Pradesh Panchayat Polls 2022: One Dead at Polling Booth in Wall Collapse

After recounting, Krishnavati lost the polls to Deepti Dwivedi by a margin of 12 votes. However, Avdhesh Tiwari again forced the election team to recount the votes for the third time. Subsequently, after holding counting for the third time, Krishna Tiwari was declared winner by three votes.

The other candidates, who were the second and third runners up, accused the presiding officer and police officials deployed in Sura gram panchayat of favouring Krishna Tiwari.

Ironically, when people of the village raised objections alleging that election was not conducted in fair manner, Sub-Divisional Magistrate (SDM) and in-charge of election did not even accept their application and left the polling booth.

Evidence showed that family members of Deepti Dwivedi tried to convince SDM and other election officials to conduct election in a fair manner and demanded recounting of votes again, but the officials were heard saying "nothing will happen now".

During the voting, presiding officer of polling booth was seen distributing tokens at 4 p.m. despite the Election Commission fixing voting time between 7.30 a.m. to 3 p.m.

After no response from the election officials or SDM and district collector, one of the candidates for the sarpanch post attempted suicide by consuming poison. He was rushed to Sanjay Gandhi Memorial hospital Rewa and after treatment was discharged from the medical facility.

Deepti Dwivedi was still hopeful that the administration will pay heed on her grievances.

"For the last three days, we have been trying to meet district collector and SDM but none is ready to meet us. They are under pressure of Avdesh Tiwari. We have all evidence that how unfair election was conducted here in Sura gram panchayat. We will stage a protest at district collector office, and if needed, will go the state election commission. A defeated candidate was declared winner, this is unacceptable," Deepti Dwivedi said.

Whether the Election Commission or the administration will pay heed to these allegations and will order for an inquiry into this matter is yet to be seen. However, soon after this controversy erupted, MP Assembly Speaker Girish Gautam asked Avdhesh Tiwari to resign for his post with immediate effect.

Avdesh Tiwari was removed from his post on Sunday.

The Panchayat polls were held on July 1.

(The above story first appeared on LatestLY on Jul 05, 2022 12:13 PM IST. For more news and updates on politics, world, sports, entertainment and lifestyle, log on to our website latestly.com).