PM insulted him. When the Uttar Pradesh CM came to Assam, he insulted Srimanth Sankar. The BJP is here for strengthening Delhi and not Assam." 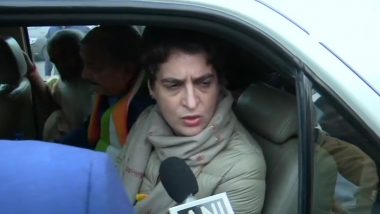 Jorhat, March 21: Congress leader Priyanka Gandhi Vadra on Sunday slammed Prime Minister Narendra Modi for not providing jobs to the youth in Assam and said that despite promising earlier that the Citizenship (Amendment) Act would not be enforced in the state, he talked about implementing it as soon as he is voted to power.

Addressing a campaign rally in Assam's Jorhat, Priyanka Gandhi attacked BJP saying, "In the last election, BJP made a lot of promises to you. They said that they will provide 25 lakh jobs. Did they provide any jobs?"

"The PM promised that CAA would not be applied. But he talked about implementing CAA as soon as he comes to power," the Congress leader said. "Did the PM ever visit a tea garden and meet women workers there? Does he feel their pain?" Vadra asked saying that his promise of providing Rs 350 per day daily wage to tea garden workers has not been fulfilled yet. Assam Assembly Elections 2021: 201 Polling Stations to Be Completely Managed by Women in Cachar, Highest in Any District.

"We are giving a solid fight and are confident. Our effort is to discuss the development and needs of the people of Assam and preserve their culture and identity," Vadra told reporters.

Taking a jibe at PM Modi during the rally in Assam, she said, "Tarun Gogoi was a Congress leader, Assam culture is in his blood. PM insulted him. When the Uttar Pradesh CM came to Assam, he insulted Srimanth Sankar. The BJP is here for strengthening Delhi and not Assam."

"Yesterday I listened to the PM's speech about a 22 years old woman's tweet. He said the Congress party is hatching a conspiracy. He said he was worried about the tweet of that girl but why did he not worry about the flood in Assam? " she asked. Assembly elections for 126 seats in Assam will be held in three phases starting from March 27 and the counting of votes will take place on May 2.