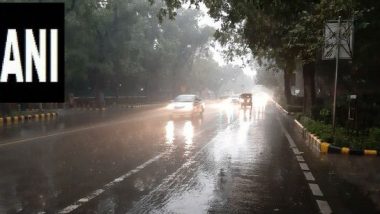 New Delhi, July 28: Delhi witnessed light to moderate rainfall on Wednesday, following which waterlogging, traffic jams and instances of wall collapse were reported at several places in the national capital.

"A small portion of road has caved-in at Shahjahan Road towards Jamnagar near India Gate. Please avoid the stretch,” the Delhi Traffic Police said in a tweet in Hindi. The road was repaired after a few hours, traffic officials said.