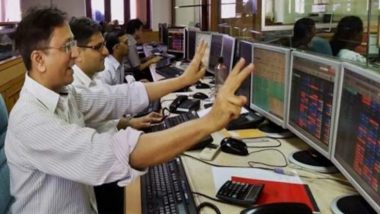 Reliance Industries (RIL) was the top loser in the Sensex pack, shedding around 4 per cent after the company shelved a proposed deal to sell a 20 per cent stake in its oil refinery and petrochemical business to Saudi Aramco for USD 15 billion. Also Read | Samsung Galaxy Z Fold4 Not Likely To Come With S Pen Slot: Report.

It said its energy portfolio has changed with the foray into a new energy business, which would require a re-evaluation of the deal. Other laggards include Maruti, Bajaj Finance, Kotak Bank and Bajaj Finserv. On the other hand, Bharti Airtel, PowerGrid, Asian Paints, IndusInd Bank and ITC were among the gainers.

Foreign institutional investors (FIIs) were net sellers in the capital market, as they offloaded shares worth Rs 3,930.62 crore on Thursday, as per exchange data. Equity markets were closed on Friday on account of 'Guru Nanak Jayanti'.

“Nifty has corrected around 4.5 per cent from the all-time high. The risk-off mood in global markets may gather strength on fresh COVID cases in Europe and lockdowns in countries like Austria,” said VK Vijaykumar, Chief Investment Strategist at Geojit Financial Services.

The dollar index rising above 96 is another concern while the decline in crude is positive for India, he said, adding that the “disastrous listing of Paytm may bring sanity to the exuberant IPO valuations”.

“FIIs are likely to accelerate selling in this risk-off environment. Retail investors need not rush in to buy on declines. Partial profit booking and raising the cash level in the portfolio may be considered,” he noted.

Elsewhere in Asia, bourses in Hong Kong and Tokyo were trading with losses in mid-session deals, while Shanghai and Seoul were positive. Meanwhile, international oil benchmark Brent crude fell 0.06 per cent to USD 78.84 per barrel.