No Traces of Novel Coronavirus in Ganga Waters, Says Study 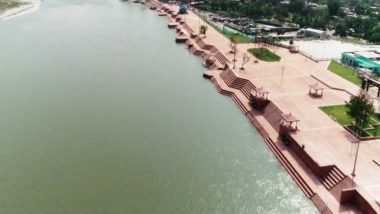 New Delhi, July 7: A government-mandated study has found no traces of novel coronavirus in Ganga waters after dead bodied were fished out from the river in some districts of Uttar Pradesh and Bihar during the peak of the second wave, sources said Wednesday.

The study was conducted by the National Mission for Clean Ganga under the Jal Shakti Ministry in collaboration with the Council for Scientific and Industrial Research's (CSIR's) Indian Institute of Toxicology Research (IITR), Lucknow, the Central Pollution Control Board and the state pollution control boards. Dead Bodies Continue To Be Dumped Into River Ganga in Bihar.

The study was conducted in two phases with the samples being taken from Kannuj, Unnao, Kanpur, Hamirpur, Allahabad, Varanasi, Balia, Buxar, Ghazipur, Patna and Chhapra, the sources added.

“None of the samples collected had traces of SARS-CoV2,” the sources said.

The virological study extracted the RNA of the viruses from the water samples to conduct an RT-PCR test to determine the viral load in the water body.

The study also included checking the biological characteristics of the river. Uttar Pradesh and Bihar were badly hit when the second wave of coronavirus swept the country. There was also a fear whether the bodies, possibly of COVID-19 infected patients, had led to the contamination of the river water which is a major source of drinking for the population in the districts along it.