Get latest articles and stories on India at LatestLY. Ahead of the Telangana Assembly elections slated in 2023, Prime Minister Narendra Modi on Sunday sounded the poll bugle as he asserted that people are paving the way for BJP's double-engine government in the state. 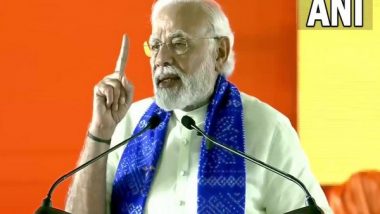 Hyderabad (Telangana) [India], July 3 (ANI): Ahead of the Telangana Assembly elections slated in 2023, Prime Minister Narendra Modi on Sunday sounded the poll bugle as he asserted that people are paving the way for BJP's double-engine government in the state.

"In other states too, we have seen that the double-engine govt of the BJP has led to increasing trust of people in it. Even in Telangana people are paving the way for BJP's double-engine government," PM Modi said at a public meeting titled as 'Vijay Sankalp Sabha' at Parade Grounds in the Telangana capital.

The Prime Minister was addressing a rally on day 2 of the BJP's national executive meeting in Hyderabad.

"When BJP's double engine government will be formed in Telangana, development work will be expedited in every city and village of the state," PM Modi added.

Furthermore, he added that recent surveys depict that women's participation in having economic assets on their names has risen in the country.

"Recently a report showed that women's share in depositing money in banks has increased. It's even better in rural areas. Survey says that women's participation in having economic assets on their names has risen. It became possible as we connected them to the banking system," he added.

Setting the tone for the 2023 state Assembly polls and the 2024 Lok Sabha elections, PM Modi said that Telangana's art and culture are a matter of pride for the country.

"People of Telangana are known for their hard work. The state's people have a lot of talent. Telangana is also known for its history and culture, its art and architecture are a matter of pride for all of us," said PM Modi.

He also stressed BJP's efforts to the welfare of Telangana's farmers and an increment in the length of the national highways in the state.

"BJP is not only making projects of innovation and tech but also providing resources to poor brothers and sisters. We're putting continuous efforts into the welfare of Telangana's farmers. In the last 8yrs, the length of NH in Telangana has increased twice; 5000km long network," said PM Modi.

Earlier, Union Home Minister Amit Shah, who made several moves to resolve the long-pending issues of the Northeastern states, on Sunday said that the BJP has found a "permanent address" in the region.

The Home Minister made the remarks while speaking at the BJP national executive meeting during his address on the political resolution. (ANI)