Three persons with 2 kilograms of heroin worth Rs 14 crore have been arrested from the international border here by the Anti-Narcotics Task Force (ANTF). 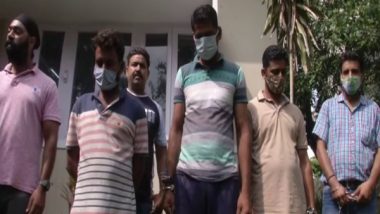 Jammu (Jammu and Kashmir) [India], July 22 (ANI): Three persons with 2 kilograms of heroin worth Rs 14 crore have been arrested from the international border here by the Anti-Narcotics Task Force (ANTF).

According to SSP Anti Narcotics Task Force Vinay Sharma, the accused persons are a part of an international drugs module operated from Pakistan.

"On specific inputs, Naresh Kumar was arrested and 1 kg of Heroin was recovered from him. On sustained questioning, he revealed one more packet is hidden near the international border and two more persons Kamal Singh and Balbir Singh were arrested and another packet was recovered with the help of Indian Army," Sharma told ANI.

He further said this can be a case of narco-terrorism as they have got the names of many operators of this drug smuggling module who are operating from Pakistan.

"In this case, the packets were thrown across the border. Drones, tunnels, pipes are being used to smuggle drugs across the border. ANTF will try extradition of people involved and may take help of interpole also," the SSP added. (ANI)