I was told that the Centre will do its bit after the government adopts a resolution in the Assembly for granting ST status to the Kurmi community. So please do the needful," he added. 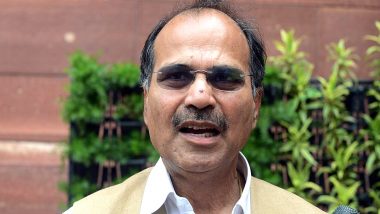 Kolkata, December 30: Slamming the TMC governmwnt in West Bengal for not doing anything for migrant workers who returned to the state during the lockdown, Congress Parliamentary Party leader Adhir Chowdhury Wednesday said the party will ensure direct cash transfer to every poor in the state if elected to power.

Chowdhury said Congress had mooted the proposal of direct cash transfer to the migrant labourers with the objective to ensure that the poor have enough liquid cash in the lockdown and post lockdown situation and the Centre had announced a Rs 50,000 crore project for them. Amit Shah Lying on Migrants’ Issue, Should Apologise, Says TMC After Union Home Minister Blames Mamata Banerjee Govt for Stopping Trains.

Congress leader Rahul Gandhi had advocated giving liquid cash to every poor person in the country as the party's poll promise before the 2019 Lok Sabha poll, he said.

"It was not empty promise. In Chhatisgarh we have already channelised over Rs 5,700 to the pocket of every poor person. We will ensure it is implemented in West Bengal too if we are elected to power in the 2021 state election," the Congress leader said.

He said it was due to the West Bengal government's attitude that the migrant labourers from Bengal are yet to get the benefits of the central project as the state did not send the required list of districts having 25,000 migrant labourers.

Expressing doubts whether Chief Minister Mamata Banerjee was "at all concerned" about the plight of migrant workers who left the state after the lockdown, he said in a video mesage, "Didi (Banerjee) at least spare a thought for them. After suffering such grave financial distress during the lockdown and return to their home state, they had to leave again as they found little employment opportunities here".

Pointing out that migrant workers contribute to the state's economy by sending money to their families, Chowdhury, who is also the WBPCC president, said "But you (Banerjee) have no time to think about them." He said, "The migrant labourers from the state are deprived of the central package as you have not sent the names of districts having 25,000 migrant labour population, which is a criteria for getting the fund."

"While many other states like Chhatisgarh, Jharkhand, Odisha, Uttar Pradesh have been able to avail the fund for their migrant workers by compiling the required list and sending it to the Centre, West Bengal played traunt ... The Mamata Banerjee government does not seem to have any plan for its own people," he said.

Comparing the TMC government's announcement of several social welfare campaigns beforethe Assembly poll to the end of season 'Chaitra sale' (discount offers by shopkeepers in Bengal in the Hindu month of Chaitra to attract customers before Bengali New Year), the Congress MP said "Suddenly Didi has woken up to people's issues after ten years in power".

"With the elections round the corner she (Banerjee) is announcing one project after another. From 'Didi ke bolo' (Tell Didi), to 'Duare Sarkar' (government at the doorstep) to 'Paray Paray Samadhan' (solution to local problems). "You (Banerjee) talk about Swasthya Sathi. Do you have belief in state health schemes? Otherwise why do your near ones go abroad for treatment?" he said.

Chowdhury alleged that West Bengal government is also not bothered about the increase in the prices of essential commodities. The Congress leader demanded that members of Kurmi community living in Purulia be given ST status.

"Once I had raised the issue in Parliament and took up the matter with the Centre. I was told that the Centre will do its bit after the government adopts a resolution in the Assembly for granting ST status to the Kurmi community. So please do the needful," he added.