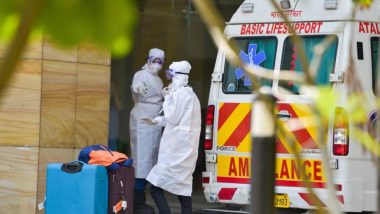 Srivastava died during treatment at a Lucknow hospital. He was on ventilator support for the last few days, a Bharatiya Janata Party (BJP) leader said.

Defence Minister Rajnath Singh, who is the local MP, condoled the deaths of the lawmakers, terming it as a great loss to the party. Rajnath Singh Mourns Death of Lucknow MLA and Uttar Pradesh BJP Senior Leader Suresh Srivastava.

Chief Minister Yogi Adityanath also condoled the deaths. Diwakar was admitted at a hospital in Meerut four days ago. His condition was serious for the last two days, the sources said, adding that he died during treatment.

Adityanath said the news of Diwakar's death was "sad".

"May the departed soul rest in peace and the bereaved family find strength to bear the loss," he said in a tweet. According to the sources, Diwakar's wife has also tested positive for COVID-19 and is undergoing treatment in Kanpur.