On the second day of his visit to the national capital, Uttar Pradesh Chief Minister on Friday called on President Ram Nath Kovind. 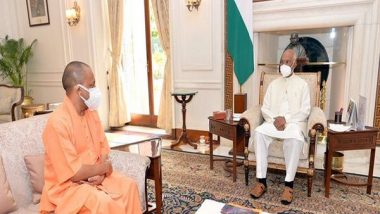 Taking to Twitter, Adityanath informed about the meeting. "Paid a courtesy call on President Ram Nath Kovind at Rashtrapati Bhavan, New Delhi, today. Heartfelt gratitude to the Honorable President for providing his invaluable time," he said.

Adityanath is on a visit to Delhi amid speculations of expansion of the Uttar Pradesh cabinet ahead of Assembly elections next year. He met Prime Minister Narendra Modi and Party President JP Nadda earlier today, while he had met Union Home Minister Amit Shah on Thursday.

With elections due in Uttar Pradesh next year, the BJP is making efforts to strengthen the organisation based on feedback from its state leaders in the wake of the outcome of panchayat polls and the murmurs from some sections over handling of COVID-19 situation. (ANI)