Jeetendra will play the role of Jeetuji Gandhi, a veteran in the diamond business who has an eye for not just diamonds but also people. 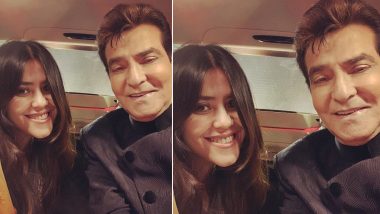 Mumbai, May 4: Veteran actor Jeetendra is all set to make his digital debut with a cameo on season two of ALTBalaji and ZEE5's "Baarish". Jeetendra will play the role of Jeetuji Gandhi, a veteran in the diamond business who has an eye for not just diamonds but also people.

The 78-year-old said it is great to be back on screen. Making his digital debut with ALTBalaji, headlined by daughter Ekta Kapoor, "feels like I'm home", he said.

"The cast and crew have been extremely warm on set and it's lovely to see their affection towards me. I am delighted to be playing the role of Jeetuji as he is someone who I can relate to.

"My fans and viewers will see the various shades of my character, who tries to reunite Anuj and Gauravi, and I'm sure they will like my short stint in this show," the actor said in a statement. "Baarish" stars Priya Banerjee, Vikram Singh Chauhan, Abhishek Verma, Anuj Duhan, Shubhangi Latkar, Benaf Patel and Sahil Shroff.