On The Roam: Jason Momoa to Star in Discovery’s Docuseries; GOT Star Will Search for Talents Who Are Master of Their Craft

The series will follow Momoa as he sets out in search of artists and dreamers who have mastered their individual crafts. 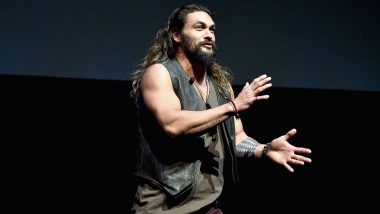 Hollywood actor Jason Momoa is set to star in a new docuseries for Discovery titled On the Roam. The series will follow Momoa as he sets out in search of artists and dreamers who have mastered their individual crafts. According to People magazine, it will document the 'Aquaman' star as he travels across the United States to meet extraordinary people who are blazing their respective paths, including motorcycle fabricators, craftsmen, musicians, and athletes, and making a difference in their industry. Aquaman 2: THIS Game of Thrones Actor is Reportedly Joining Jason Momoa in the Sequel Of His Superhero Movie.

"On the Roam is an endless quest for me to discover extraordinary people and places. I'm thrilled to be collaborating with Discovery on this journey," Momoa said in a statement on Tuesday. Through engaging with those who share his love and passion for the craft, Momoa will explore not just their unique trade or skill, but a deeper way of seeing the world through their eyes. "It is a journey of intention -- an endless quest with purpose and celebrating those who make a difference in the world around them," according to a release from Discovery. Aquaman 2: Amber Heard Fired From Jason Momoa’s Blockbuster Franchise Following the Johnny Depp Row?.

As per People magazine, in addition to starring on the show, Momoa will also serve as an executive producer alongside Brian Andrew Mendoza for the production of 'On the Roam'. Howard Swartz, Joseph Boyle, and Kyle Wheeler are executive producers for Discovery. A premiere date for 'On the Roam' has not yet been announced.