In his recent stand up act, Ricky Gervais made crude comments about trans people. Here is what the internet had to say. 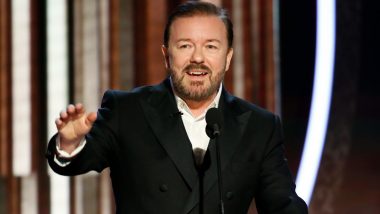 English comedian Ricky Gervais' recent stand-up special has been drawing a lot of flak because of its hurtful transphobic jokes, according to Variety. Four minutes into the special, Gervais dives into material about the trans community that seems to be calculated to draw controversy. The Netflix stand-up special, titled SuperNature, starts off with Ricky saying, "Oh, women! Not all women, I mean the old-fashioned ones. The old-fashioned women, the ones with wombs. Those f***ng dinosaurs." Ricky Gervais Boards Comedy Series ‘Greenlight – German Genius’ Inspired by His Tweet.

"I love the new women. They're great, aren't they? The new ones we've been seeing lately. The ones with beards and c****. They're as good as gold, I love them."

He continues, "And now the old-fashioned ones say, 'Oh, they want to use our toilets. Why shouldn't they use your toilets? For ladies! They are ladies -- look at their pronouns! What about this person isn't a lady? Well, his p****'. Her p****, you f***ing bigot! What if he rapes me? What if she rapes you, you fucking TERF w****?"

TERF, or Trans-Exclusionary Radical Feminist, has been associated with people who reject the notion that trans women are women.

A few minutes later, reports Variety, when discussing Kevin Hart removing himself from hosting the Oscars in 2018 for past homophobic tweets, Gervais continued joking about the trans community.

"You can't predict what will be offensive in the future," Gervais says. "You don't know who the dominant mob will be. Like, the worst thing you can say today, get you cancelled on Twitter, death threats, the worst thing you can say today is, 'Women don't have p******,' right? Now, no one saw that coming. You won't find a ten-year-old tweet of someone saying, 'Women don't have p******.' You know why? We didn't think we f****** had to!"

Towards the end of the special, Gervais offers his reasoning for trans jokes, saying: "Full disclosure: In real life of course I support trans rights. I support all human rights, and trans rights are human rights. Live your best life. Use your preferred pronouns. Be the gender that you feel that you are. But meet me halfway, ladies: Lose the c***. That's all I'm saying." Ricky Gervais, Julia Quinn and Others to Appear at Netflix's Stories Festival in London.

Several netizens, according to Variety, took to Twitter to express their dissatisfaction over the stand-up special and condemned Ricky for his material. One user wrote, "Ricky Gervais is a disgrace, he is going to cause hate crime and ultimately the death of trans folk. Anyone who needs to vilify minorities to get a laugh is the most evil hateful soul and seriously needs mental help."

Another wrote: "Ricky Gervais could go after the governments, banks, billionaires. The ones causing actual harm to ordinary people all over the world on an unfathomable scale every single day. But he goes after trans people instead. Yeah Ricky, son, you speak your truth to power. Coward."

(The above story first appeared on LatestLY on May 25, 2022 01:29 PM IST. For more news and updates on politics, world, sports, entertainment and lifestyle, log on to our website latestly.com).