Ricky Gervais, Julia Quinn and Others to Appear at Netflix's Stories Festival in London

According to Variety, Ricky Gervais and the cast of After Life are among those who will take the stage at Picturehouse Central, 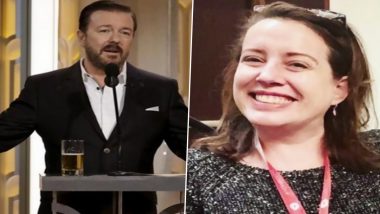 The cast and writers of After life and Bridgerton are set to attend Netflix's inaugural Stories Festival in London, slated for later this month. According to Variety, Ricky Gervais and the cast of After Life are among those who will take the stage at Picturehouse Central, with Gervais talking about his approach towards writing and directing the popular series. Queen Charlotte, Golda Rosheuvel, author Julia Quinn and director Tom Verica of 'Bridgerton' will also attend to talk about the process of taking the hit series from book to screen. Red Notice Trailer Out! Ryan Reynolds, Dwayne Johnson, Gal Gadot’s Thriller To Stream on Netflix From November 12 (Watch Video).

Other Netflix projects that will be given a spotlight include the upcoming Aardman animation 'Robin Robin', with directors of the upcoming holiday special, Dan Ojari and Mikey Please, scheduled to talk about creating and developing the stop-motion project. Author Robert Harris will discuss the adaptation of his novel into the Netflix thriller 'Munich - The Edge of War' alongside the film's director Christian Schwochow and producer Andrew Eaton. Seinfeld: Netflix Sets Debut Date for Iconic Hit Comedy Series.

The latest additions to the line-up will join previously announced names including Jed Mercurio ('Line of Duty'), 'Top Boy' star Ashley Walters and former shadow chancellor Ed Balls, author of 'Appetite: A Memoir in Recipes of Family and Food'. The festival will also give audiences an inside look at some of their favourite Netflix projects, it will host live readings, talks and workshops from personalities such as Dr Amir Khan ('The Doctor Will See You Now'), Anita Rani (presenter and author of 'The Right Sort of Girl'), CandiceBrathwaite ('I Am Not Your Baby Mother') and Daisy Buchanan ('Insatiable'). As per Variety, the festival will run from September 24 to September 26.