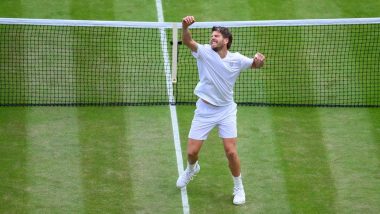 Wimbledon, Jul 3 : Cam Norrie became the first British man in five years to reach the Wimbledon quarterfinals, beating Tommy Paul in straight sets on No. 1 Court here on Sunday. The ninth-seeded Norrie was only broken once as he won 6-4, 7-5, 6-4. He is the first British male quarterfinalist since Andy Murray in 2017 and will face David Goffin of Belgium. Norrie reached a career-high ranking of No. 10 this year but this is the first time he's been past the third round of a Grand Slam tournament. The 30th-seeded Paul was playing at Wimbledon for the first time and was trying to reach his second Grand Slam quarterfinal. Wimbledon 2022: David Goffin Edges Out Frances Tiafoe To Set Up Quarterfinal Clash With Cameron Norrie.

David Goffin reached his second Wimbledon quarterfinal after outlasting Francis Tiafoe in five sets. The Belgian won 7-6 (3), 5-7, 5-7, 6-4, 7-5 on No. 2 Court in a tight contest that lasted 4 hours, 36 minutes. Goffin also reached the quarters in his last Wimbledon appearance in 2019, but missed last year's tournament with an injury. Tiafoe called for a physio after winning the third set and was given a pill, then quickly went down 5-1 in the fourth as his first-serve percentage dipped. The No. 23-seeded American held two break points at 5-5 in the fifth set but Goffin saved them both with powerful serves, then converted his first match point in the next game when Tiafoe netted a backhand.

Goffin will face the winner of the match between Cam Norrie and Tommy Paul.

Jule Niemeier is into the quarterfinals in her first Wimbledon appearance after denying British veteran Heather Watson a spot in the last eight. The 22-year-old Niemeier, who is playing just her second Grand Slam tournament after losing in the first round of the French Open in May, beat Watson 6-2, 6-4 on Centre Court. The German converted her third match point when Watson netted a backhand. The 30-year-old Watson was playing in her 43rd major tournament and had reached the fourth round of a Grand Slam for the first time. Wimbledon 2022: Novak Djokovic Tames Wildcard Tim Van Rijthoven to Set Up Jannik Sinner Clash In Quarterfinals.

The 103rd-ranked Maria won 5-7, 7-5, 7-5 on No. 1 Court. The German is the oldest woman left in the singles draw and had only been past the second round once in 34 previous Grand Slam appearances. She saved two match points at 5-4 in the second set, then had a chance to serve out the match at the same score in the third but was broken. But she broke Ostapenko again and then converted her second match point when the Latvian sent a service return wide.

Maria's previous best result at a Grand Slam was reaching the third round at Wimbledon in 2015. She lost in the first round in her last eight major appearances. Ostapenko reached the Wimbledon semifinals in 2018. Marie Bouzkova of the Czech Republic beat Caroline Garcia of France 7-5, 6-2 in a fourth-round match on No. 2 Court to reach her first Grand Slam quarterfinal. The 23-year-old Bouzkova will next face either third-seeded Ons Jabeur or Elise Mertens for a place in the semifinals. Bouzkova upset seventh-seeded Danielle Collins in the first round.