David Goffin held his nerve to clinch a thrilling five-set fourth-round victory over Frances Tiafoe to reach the Wimbledon 2022 quarter-finals, here on Sunday. 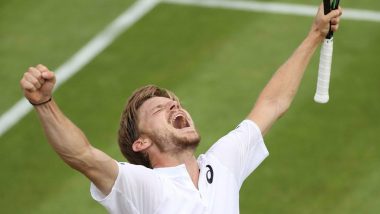 London, July 4: David Goffin held his nerve to clinch a thrilling five-set fourth-round victory over Frances Tiafoe to reach the Wimbledon 2022 quarter-finals, here on Sunday. The former World No 7 rallied in the final two sets to seal a 7-6(3), 5-7, 5-7, 6-4, 7-5 win against the 23rd-seeded American on No 2 Court. Goffin also prevailed in the pa'r's second-round meeting on the clay at Roland Garros just five-and-a-half weeks ago. "It was an amazing battle, I had to stay mentally in the match the whole time. Just after the match point, I was mentally dead, because I had to stay fresh all the time to keep my serve, to fight to come back after losing the third set. Wimbledon 2022: Novak Djokovic Tames Wildcard Tim Van Rijthoven to Set Up Jannik Sinner Clash In Quarterfinals.

It was a tough one," said Goffin in his on-court interview after his four-hour, 36-minute triumph. "It was an amazing atmosphere on this court, another epic match against Frances' so I'm very happy to be in the quarter-finals again," he added. A topsy-turvy encounter saw both players break their opponent's serve six times. It was Goffin who found one at the crucial time, however, sealing a decisive break in the 12th game of the fifth set to complete a memorable victory.

The Belgian also reached the quarterfinals on his last appearance at SW19 in 2019, when he fell to eventual champion Novak Djokovic. The 31-year-old's opponent in the last eight this time around will be home hope Cameron Norrie, after the British No 1 downed Tommy Paul 6-4, 7-5, 6-4 to reach the quarter-finals at a Grand Slam for the first time. In an accomplished display on Court No 1, the Briton outlasted Paul as he demonstrated great energy to cover the court, while he flattened out his backhand to turn the table in points and advance after two hours and 21 minutes. Roger Federer Meets Rafael Nadal At Wimbledon 2022 (See Post).

"To make the quarters for the first time, in front of my family and friends here from college is so special. In a huge match, to play the way I did was really good. To execute everything. I really enjoyed it. It is pretty crazy, I have a lot of feelings," Norrie said in his on-court interview. Norrie, who had never been beyond the third round at a major before this week, now leads the 25-year-old Paul 3-1 in their ATP Head to Head series. He is the first British man to reach the last eight at The Championships since two-time titlist Andy Murray in 2017, while he is just the fifth British man overall to achieve the feat.

The 26-year-old who is making his fifth Wimbledon appearance will look to continue his run when he plays David Goffin next. The Belgian edged American Frances Tiafoe 7-6(3), 5-7, 5-7, 6-4, 7-5 to equal his best run in London. Norrie flew out of the blocks against Paul in front of a lively home crowd, breaking in the first game to quickly gain control. The World No 12 hit his watertight groundstrokes with great precision and he raised his level when it mattered most, saving all four break points he faced in the first set to lead.

An entertaining second set saw Norrie race ahead again as he looked to control the tempo from the baseline. After failing to serve out the set at 5-4, the Briton quickly regained his composure to break again. With the wind in his sails and the crowd behind him, the ninth seed then held firm in the third set as he showed the mentality that saw him capture the Indian Wells title last year to advance. Paul was also competing in the fourth round at a Slam for the first time, having not dropped a set en route. The World No. 32, who was making his Wimbledon debut, was one of four Americans to reach the last 16, the most at Wimbledon since 1999.

(The above story first appeared on LatestLY on Jul 04, 2022 08:50 AM IST. For more news and updates on politics, world, sports, entertainment and lifestyle, log on to our website latestly.com).