IPL 2021: ‘Chennai Super Kings Is Going To Be Tough, It Will Be a Good Competition’, Says Mumbai Indians Opener Quinton De Kock

Mumbai Indians opener Quinton de Kock feels the game against Chennai Super Kings (CSK) will be "tough" but the Rohit Sharma-led side can look at their previous encounters with the Men In Yellow to get a psychological boost. 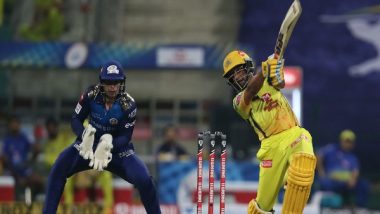 New Delhi, May 1: Mumbai Indians opener Quinton de Kock feels the game against Chennai Super Kings (CSK) will be "tough" but the Rohit Sharma-led side can look at their previous encounters with the Men In Yellow to get a psychological boost.

CSK and Mumbai Indians walk into this game with thumping victories in their previous matches. CSK is on top of the points table after stringing five consecutive wins in six outings while Mumbai Indians is at the fourth spot having won just three games. IPL 2021: ‘Chennai Super Kings Title Contenders, Win Over Mumbai Indians Will Solidify the Position’, Says Scott Styris.

"Obviously playing against Chennai is a big game. It's quite a big rivalry and every time we play against them, you always hear the talk of it. So it is always a big game for us. Saying that, when we do play them, we know they are going to be tough but we'll also be nice and tough. So it will be a good competition, I'm sure," de Kock said in the video posted on Mumbai Indians Twitter handle.

"They (CSK) got a lot of confidence. They have won five games in a row. We are three from six but saying that, in the past, since I've been with Mumbai, we have done really well against Chennai as a team. So it's going to be a good match," he added.

De Kock might have been going through a lean patch but the opener scored runs for Mumbai Indians when it mattered the most. The left-handed batsman guided Mumbai to a win over Rajasthan Royals on Thursday with a gutsy fifty.

"Our last game which we won was also important and we did it very convincingly. We need to take the confidence going into our next match. I'm not saying we have momentum yet but if there's ever a starting point, it is now for us, for the rest of the tournament," said de Kock.

"It was nice to start batting, to be scoring some runs again for the team. It's only one game but yeah, it was nice playing out there," he added.

Mumbai Indians will take on CSK on Saturday at the Arun Jaitley Stadium and de Kock expects some firepower batting from both sides. "It's decent wickets, it's quite skiddy. Not a lot of bounce, but quite skiddy, didn't spin that much. So it's a good wicket I think, some big scores will be put up there," he signed off.