Get latest articles and stories on Sports at LatestLY. Andre Russell scored unbeaten 49 runs with the bat and took three wickets with the ball to guide Kolkata Knight Riders to a 54-run win against Sunrisers Hyderabad here at MCA Stadium in Pune on Saturday. 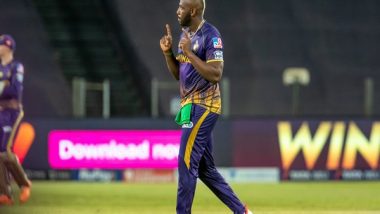 Pune (Maharashtra) [India], May 14 (ANI): Andre Russell scored unbeaten 49 runs with the bat and took three wickets with the ball to guide Kolkata Knight Riders to a 54-run win against Sunrisers Hyderabad here at MCA Stadium in Pune on Saturday.

KKR now are currently at sixth position in the points table with 12 points. SRH are at the eighth position with ten points.

Chasing 178, Sunrisers Hyderabad got off to a solid start with opener Abhishek Sharma and Kane Williamson going for boundaries. But the opening duo could not stand longer as Andre Russell removed Williamson for 9 runs to give KKR an early breakthrough.

Sharma looked in great touch, smashing Sunil Narine for two sixes in the eighth over. Rahul Tripathi tried to anchor a partnership with aggressive batter Abhishek Sharma but was sent back to the pavilion by Tim Southee after scoring just 9 runs.

This brought explosive batter Aiden Markram to join the opener to continue the proceedings. They built a partnership with the proper mix of aggression and caution needed for a 178-run chase. However, this stand could not last long either as Sharma was caught behind by keeper Sam Billings of Varun Chakaravarthy's delivery for 43.

The next batter Nicholas Pooran could not stay for long too as he was dismissed by Narine. At the end of 13 overs, SRH were 84/4, with Washington Sundar (1*) and Aiden Markram (18*) at the crease. At this stage, the side needed a big partnership.

Markram targeted spinner Chakaravarthy, hitting 13 runs in the 14th over of the innings. At this stage, SRH needed 87 runs in 36 balls. However, this could not continue for long as Markram was bowled by Umesh Yadav for 32 off 25. Markram's wicket put SRH under great pressure as their middle batting order have not clicked this season yet.

Hyderabad crossed the 100-run mark in the 15th over. The young Shashank Singh came next to the crease to join Sundar. In the final two overs, SRH needed a miracle to score 68 runs to win. Marco Jansen was dismissed at the end of the 18th over for 11 by Russell with a catch by Billings, bringing Bhuvneshwar Kumar to the crease.

In the 19th over of the innings, Southee dismissed Shashank Singh for 11 runs. SRH finished at 123/8 in their 20 overs, losing the game by 54 runs.

Earlier, A 63-run stand between Sam Billings (34) and Andre Russell powered Kolkata Knight Riders to a solid 177/6 in their 20 overs here at MCA Stadium in Pune on Saturday.

Batting first, Kolkata Knight Riders got off a shaky start, as opener Venkatesh Iyer was bowled by pacer Marco Jansen for only 7 in the second over of the match.

This brought batter Nitish Rana to the crease. Things were not really good for KKR till the fourth over, as the duo of Jansen and Bhubaneshwar Kumar kept the run flow tight.

The other opener Ajinkya Rahane and compatriot Rana started their assault on SRH bowlers in the fifth over that catapulted them to a great score by the end of the powerplay. The fifth and sixth overs bowled by pacer T Natarajan and Jansen were smashed for 18 and 17 runs respectively, powering Knight Riders to a solid 55/1 at the end of the powerplay, with Rana (24*) and Rahane (20*) standing tall.

The pair continued their strong show before the pace sensation Umran Malik dismissed Rana for 26 off 16 with an assist from Shashank Singh's safe hands, ending a 48-run stand between the duo.

This brought captain Shreyas Iyer to the field, who welcomed Malik with a four over the backward point. Malik ended the over on a high, getting Rahane for 28 off 24 with Shashank Singh taking another catch.

This brought the Englishman Sam Billings to the crease. In the 10th over, Iyer was Malik's next victim as he was dismissed after being caught by Rahul Tripathi at deep midwicket for 15 off 9.By the end of 10 overs, KKR had lost the momentum initially gathered via Rana-Rahane stand as they stood at 83/4 with Sam Billings (3*), who was joined by Rinku Singh. Singh was eventually dismissed for Natarajan in the 12th over, scoring only 5. With this, half of KKR was back in the pavilion at a score of 94.

Andre Russell came down the crease, with a responsibility to stitch a match-saving stand and muscle his way through the SRH bowling attack. He and Billings resumed the rebuilding efforts for KKR with some strike rotation and some heavy hits occasionally.

At the end of 15 overs, KKR stood at 119/5, with Billings (15*) and Russell (16*). Billings hit Malik for two consecutive fours in the 16th over, which ended on an expensive note for the pacer, giving away 10 runs, ending his spell with three wickets and 33 runs conceded.

The next over by Kumar went for 13 runs. Natrajan took the ball in the 18th over with a responsibility to arrest the run flow in death overs. The duo brought their 50-run stand in 36 balls. The very next ball was smashed by Billings for a six to help Knight Rider sail over the 150-run mark.

Bhuvaneshwar was back bowling the 19th over and he got the breakthrough for SRH by dismissing Billings for 34 off 29, ending the 63-run stand between the duo.

Finally, KKR finished at 177/6 in their 20 overs, thanks to Russell's explosive onslaught on Washington Sundar, hitting him for three sixes. Russell finished at 49*, while Sunil Narine at 1*.Umran Malik was the pick of the bowlers for SRH, finishing with 3/33 in four overs. Kumar, Jansen, and Natarajan got one wicket each.