With this loss, KKR are out of IPL 2022 playoffs contention with 12 points against their name after all 14 league matches played. Lucknow climbed to the second spot with 18 points with its victory in the high-scoring match that had spectators on the edge of their seats. 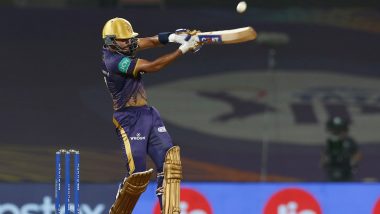 Navi Mumbai (Maharashtra) [India], May 19: After engaging in a last-ball thriller against Lucknow Super Giants, Kolkata Knight Riders skipper Shreyas Iyer called it one of the best games he ever played. A blistering century by Quinton de Kock and an attacking half-century by KL Rahul saw LSG defeat KKR in a nerve-wracking IPL 2022 match by 2 runs at the Dr DY Patil Stadium here on Wednesday.  KKR vs LSG Stat Highlights, IPL 2022: Quinton de Kock Shines With Century As Kolkata Get Eliminated.

"I am not feeling sad at all. That was one of the best games of cricket I have played. The way we showed our character and attitude was simply outstanding. I love the way Rinku got us till the end but unfortunately couldn't time it when two balls were remaining, he was really sad. I was hoping he could finish the game for us and could have been the hero, but still played a fantastic knock and I am really happy for him. When we came in, I never thought it would play this way because it was dry and the grass wasn't that wet," said Shreyas in a post-match presentation.

"I thought there would be little help for the spinners but once they started going. LSG took on the bowlers and got a par total. It was a do or die situation for us, even after losing two wickets in the powerplay, our mindset was to go for the chase and take it close as possible and put them under pressure," he added.

KKR batter Rinku Singh smashed 40 runs off 15 balls, which turned the tide in the favour of Kolkata but he was dismissed when three runs were needed off two balls. "It was a volatile season for us, we started great but lost five games in a row and I personally feel we did a lot of chopping and changing, we had to do that because of the niggles and form, but we also got to know the players such as Rinku. The vibe has always been positive in the dressing room and we never hit the panic button," said Shreyas.

With this loss, KKR are out of IPL 2022 playoffs contention with 12 points against their name after all 14 league matches played. Lucknow climbed to the second spot with 18 points with its victory in the high-scoring match that had spectators on the edge of their seats. LSG's opening pair smashed several records as they remained unbeaten at the end of 20 overs with 210 runs on board. The duo scored the highest opening stand in IPL history. Quinton de Kock remained unbeaten with a swashbuckling 140.

KKR showed a lot of heart and courage in their chase as they clocked 208 runs after the 20 overs, just 3 runs short of the target. Shreyas Iyer smashed 50 while Nitish Rana and Rinku Singh played quick knocks of 42 and 40 respectively. For LSG, Moshin Khan and Marcus Stoinis scalped three wickets each. (ANI)