Both represented Guyana Amazon Warriors in the league. 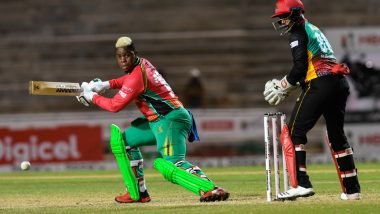 Dubai, September 13: Delhi Capitals' Keemo Paul and Shimron Hetmyer on Sunday arrived in Dubai ahead of the upcoming edition of the Indian Premier League (IPL).

The West Indies duo arrived in the UAE for IPL after taking part in the recently-concluded Caribbean Premier League (CPL). Both represented Guyana Amazon Warriors in the league.

The 13th edition of the IPL will be played from September 19 to November 10, across three venues in the UAE -- Abu Dhabi, Sharjah, and Dubai. Defending champions Mumbai Indians will take on Chennai Super Kings in the opening game of the season. Delhi Capitals will compete against Kings XI Punjab in their opening match on September 20.