Indian wrestler Babita Phogat has urged every sportsperson of the country to observe two minutes of silence to pay tribute to track legend Milkha Singh. 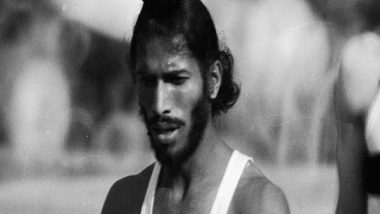 One of the country's earliest sports heroes, Milkha died of Covid-related complications in a private hospital in Chandigarh late on Friday night, leaving the sporting community in shock and disbelief.

Babita said she is unable to believe that legendary athlete Milkha Singh has passed away.

"I am sad to hear the demise of Milkha Singh ji. Today India has lost a star of the sports fraternity. I am unable to believe that he has left us. May his soul rest in peace. And I urge every sportsperson to observe two minutes' silence to pay tribute to him," Babita told ANI.

"It's really heartbreaking news for each sportsperson and sports lovers and for our country. He lived a happy life till 91, he was healthy and he was happy and was an inspiration for many," said Anju.

"We all know his story, how he missed the medal in Olympics, he came through all the odds. He was the real legend and I am really missing his presence now," she added.

"I pray to God that his family is able to handle the loss and may his soul rest in peace. Milkha Singh ji was a diamond of the Indian sports fraternity. He played an important role in taking sports forward in the country," said Yogeshwar.

"I had met him around 8-10 years ago, he had the vision to see Indian athletes winning a medal at Olympics. He told me that I should aim for a bigger target if I want to achieve my goal. Today is a sad day for the nation," he added.

Milkha had a personal best of 20.7 seconds in 200m in Lahore on January 31, 1960. It set him up for a gallant show in the Rome Olympic Games where he clocked a National Record time of 45.6 seconds in the 400m final on September 6.

Besides his 1960 Olympic Games heroics, Milkha Singh will be remembered for his victory in the 1958 Commonwealth Games in Cardiff. He won gold in the 440-yard sprint in a Games Record time of 46.6 seconds.

Milkha Singh is survived by one son and three daughters. His wife and former captain of the Indian women's national volleyball team Nirmal Milkha Singh succumbed to COVID-19 at the age of 85 on June 13. (ANI)