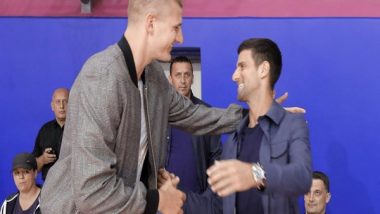 "MVP! MVP! This is for my friend Nikola Jokic, The Joker," Djokovic said in a video posted by Nuggets on Instagram. "Congratulations for your MVP, well deserved. Sending you big regards from Paris, Roland Garros. I'm carrying you today with me in practice and hopefully bringing you luck in the playoffs. All the best, my friend!"

Djokovic and Jokic are both Serbian. The tennis star has long supported countrymen who compete in other sports.

Djokovic made this video whilst he was preparing for the blockbuster clash on Thursday against Rafael Nadal which will also be a repeat of last year's French Open final. Both players will be playing for history as Djokovic wants to edge closer to 20 Grand Slams, whilst Nadal could move within one victory of a record 21 Major titles.

Nikola Jokic winning MVP was historic for many reasons as the No. 41 pick in the 2014 NBA Draft is the lowest draft pick in NBA history to win the prestigious award. He also became the first player in franchise history to be named MVP and the first true center to be named MVP since Shaquille O'Neal in 2000.

Jokic appeared in all 72 games with the Nuggets this season, posting career-highs across the board of 26.4 points, 10.8 rebounds, and 8.3 assists on .566/.388/.868 shooting splits. The three-time All-Star led the league with 60 double-doubles and ranked second behind only Russell Westbrook (38) with 16 triple-doubles. The Nuggets finished the season with a 47-25 record behind Jokic's play, good for third in the Western Conference.