This Day That Year: India Scripted History After a Win Over Australia at Eden Gardens in 2001

Australians were in total control at the Eden Gardens despite spinner Harbhajan Singh's hattrick. The visitors had also enforced the follow-on as in the first innings India was bundled out for 171 in reply to Australia's 445. 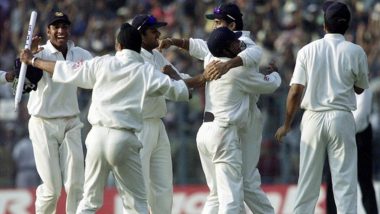 New Delhi, March 15: On this day twenty years ago, Sourav Ganguly-led Team India scripted one of the most memorable wins in the longest format of the game against Australia at the Eden Gardens in Kolkata.

Australia was in a dominant position for the majority of the match and the game was a must-win for India after losing the first Test. Australians were in total control at the Eden Gardens despite spinner Harbhajan Singh's hattrick. The visitors had also enforced the follow-on as in the first innings India was bundled out for 171 in reply to Australia's 445.

In the second innings, Indian openers were dismissed and VVS Laxman came out to bat next. Nobody would have anticipated that the batsman would go on to produce a 'miracle' for the side. He found support in Rahul Dravid when India was reeling at 232/4 in the second innings and the duo went on to stitch together a partnership of 376 runs. Laxman and Dravid dismantled the Aussie bowling attack which comprised Shane Warne and Glenn McGrath. Virat Kohli, Ishan Kishan Praised on Twitter as India Defeat England by Seven Wickets in Second T20I to Level Series 1–1 (See Reactions).

Laxman went on to score 281 and enabled India to produce one of the greatest comeback victories. This knock by Laxman was the highest score by an Indian batsman till 2004 which was later surpassed by Virender Sehwag. Dravid too was at his usual best as he hit a belligerent 180 before he got run out.

Reliving his greatest knock, Laxman on Sunday said to be a part of the "wonderful" side was a magical experience. "Can't believe it's been 20 years! Honoured and humbled to have played my role in a memorable Test match. To be a part of that wonderful team was magical, as was having a fulfilling partnership with my good friend," Laxman tweeted.

India declared at 657/7 and Australia was given a target of 384 runs on day five (March 15). The visitors started off well with Matthew Hayden and Michael Slater scoring 67 and 43 runs respectively before Harbhajan spun a web over Australia taking six wickets to bundle them out at 212.