Qatar Stages Draw for FIFA World Cup 2022.There will be 37 nations involved in the draw ceremony but five teams will ultimately not reach the tournament, which begins on Nov. 21. 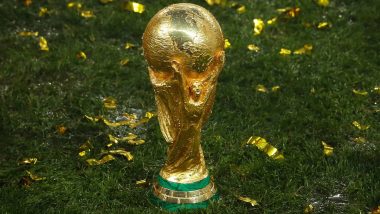 Doha, Apr 1 : Coaches and soccer officials are gathering in Qatar for Friday's draw for the Middle East's first World Cup. There will be 37 nations involved in the draw ceremony but five teams will ultimately not reach the tournament, which begins on Nov. 21. 2022 FIFA World Cup Draw Live Streaming Online: Where To Watch Live Telecast of Qatar 2022 Draw on TV in Indian Time (IST)?.

The full lineup will not be known until at least June, when the intercontinental playoffs and the final European qualifiers are completed. The show at the Doha Exhibition & Convention Center starts at 7 p.m. (1600 GMT) and lasts one hour. Teams will be split into eight groups of four, with 16 advancing from the group stage. The day began with a protest outside FIFA headquarters in Zurich. German artist Volker-Johannes Trieb used balls filled with sand to protest against the suffering of migrant workers in Qatar who have worked on the infrastructure related to the World Cup.