Keith's legacy will always be remembered through developing the pink cricket ball at the MCC, making day-night cricket around the world a reality. It was on Keith's watch that Adelaide staged the first-ever day-night Test match when Australia played New Zealand in November 2015. 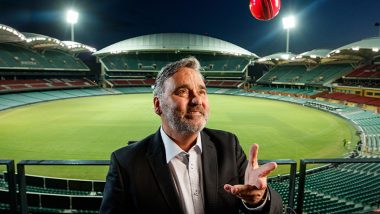 Melbourne [Australia], November 9 (ANI): South Australia Cricket Association (SACA) Chief Executive Officer Keith Bradshaw, passed away late Monday at the age of 58 following a long illness. He held the position of CEO at the SACA for almost a decade and during that time, Keith oversaw the construction of the Adelaide Oval redevelopment from a cricket perspective, also driving the early stages of the BBL and WBBL in Adelaide. Through his dedication, the Adelaide Strikers became the most attended team in the Big Bash Leagues, creating a new tradition with the New Year's Eve fixture. Pakistan's Asif Ali and Ireland's Laura Delany Voted ICC Players of Month

Cricket Australia in a release stated: "Cricket Australia pays tribute to the life of South Australia Cricket Association (SACA) Chief Executive Officer Keith Bradshaw, who passed away late yesterday at the age of 58 following a long illness. Keith was a universally loved and respected leader in the game."

Keith was appointed CEO of the SACA in November 2011, following five years in the same position with the Marylebone Cricket Club at Lord's where he was the first non-Englishman to hold the esteemed position.

Keith's legacy will always be remembered through developing the pink cricket ball at the MCC, making day-night cricket around the world a reality. It was on Keith's watch that Adelaide staged the first-ever day-night Test match when Australia played New Zealand in November 2015. Two years later, the Adelaide Oval hosted a record attendance for the venue with another day-night Test, this time as part of the Ashes. During his time as SACA CEO, the South Australia Scorpions won the Women's National Cricket League for the first time in its history in 2016 when it beat New South Wales in Hurstville, a match Keith attended even though the inaugural day-night Test was taking place at the same time. Keith also played cricket for the state of his birth, Tasmania, making 25 first-class and nine List A appearances between 1984 and 1988. Kuldeep Yadav, Shikhar Dhawan, Suresh Raina Thank Ravi Shastri and Other Coaching Staff for Their Immense Support Throughout the Journey

He scored more than 1200 representative runs, including two hundreds, and took 13 wickets. Richard Freudenstein, Cricket Australia Chair, paid tribute to Keith. "Although many within the cricket family were aware that Keith was battling a serious long-term illness, the news of his passing at such a young age is devasting for cricket and all who had the good fortune to know him," he said."Keith's contribution to cricket in Australia and the UK cannot be understated. His legacy is an ongoing testament to a lifetime of achievement in the game."

"He fought his long-term illness with courage and fortitude and despite whatever he was going through, he always had a smile and lots of time for everyone he met," he added.