Mercedes' Valtteri Bottas has been handed a three-place grid drop at Sunday's Styrian Grand Prix for dangerous driving, after an unusual incident saw him spin his car coming out of his pit box in Free Practice 2. 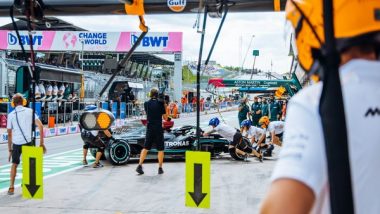 Styria, June 26: Mercedes' Valtteri Bottas has been handed a three-place grid drop at Sunday's Styrian Grand Prix for dangerous driving, after an unusual incident saw him spin his car coming out of his pit box in Free Practice 2.

Stewards also gave the Finn two penalty points for the incident. "When [Bottas] pulled away from his designated pit stop position," ran the stewards' verdict as per F1 official website, "he lost control of the car when he turned into the fast lane. He oversteered, spun, and came to a stop across the fast lane near the McLaren pits." 2021 Formula 1 Styrian GP Preview: Timings in IST, Date, Live Streaming, Venue & Other Details You Need to Know About the Grand Prix at Red Bull Ring.

During the hearing, Bottas stated that in the past they have been losing time in the pit departure. So they tried something new, which was to leave in second gear. As a result, the wheel spin was much higher and the result unexpected.

Therefore he didn't manage to control the car properly into the fast lane. "This has to be considered as potentially dangerous driving, especially as personnel were around in the pit lane," the verdict added.

This drop came as a blow to the Silver Arrows as they are in a tight battle with Red Bull, who are 37 points clear in the constructors' standings after seven races.

Red Bull's Max Verstappen, the 12-point world championship leader, topped both practice sessions on Friday as F1 arrived in Austria for back-to-back races at the Red Bull Ring in the heart of the picturesque Styrian hills.