India boxer Simranjit Kaur bowed out of the ongoing Tokyo Olympics after Thailand's Sudaporn Seesondee defeated her in women's lightweight (57-60kg) by 5-0 here at Kokugikan Arena on Friday. 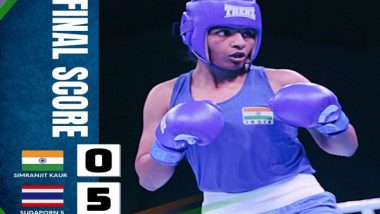 Seesondee advanced to the quarterfinals after this victory against Simranjit in the lightweight category. All five judges gave the unanimous decision in favor of Thailand's boxer as she thrashed the Indian in three rounds.

Simranjit started the match with a flurry of punches but it was Sudaporn who came out at the top with all judges ruling in the favour of the Thai boxer.

Seesondee started the second round brilliantly as she landed three successive left hands-on Simranjit. And continued to derail the rhythm of the Indian boxer and took the round very easily.

Simranjit had no chance but to aim for the knockout in the third round. The Indian went on offense but the clever footwork by Thai pugilist never gave her any clear-cut chance.

Earlier on Thursday, Mary Kom, the face of India's boxing contingent, faced a shocking defeat -- split decision -- at the hands of Colombia's Ingrit Valencia to bow out from the ongoing Tokyo Olympics on Thursday. Valencia won bout 3-2. (ANI)