As with the Spectacles and Echo Frames, Facebook's Ray-Ban smart glasses will allow a user to stay connected to whatever device that may be without distracting its user from their current environment. 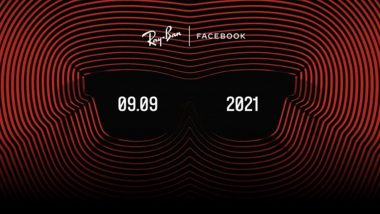 Washington, August 1: Facebook CEO Mark Zuckerberg recently announced the company's next consumer product- Ray-Ban smart glasses, the details of which have been under the wraps until now. If you are tech-savvy and want to get some insights into the properties of the upcoming device, then we have got you covered!

In a statement to Mashable, a Facebook spokesperson provided some insight as to how the smart glasses will likely rely on your phone to work. As per Mashable India, the upcoming device would not act as a standalone device but will work in conjunction with a smartphone or another external display.

The device wouldn't have an integrated display, as reported by The Verge last year; but there have been some speculations that it will function the same way Snapchat Spectacles or Amazon Echo Frames do.

According to Mashable India, the device might actually be much more similar to those other smart frames. As with the Spectacles and Echo Frames, Facebook's Ray-Ban smart glasses will allow a user to stay connected to whatever device that may be without distracting its user from their current environment.

For those who are worried that Facebook will use the device as an opportunity to gather information on its users for its upcoming project Aria AR glasses, Facebook said its "Ray-Ban glasses are completely separate from Project Aria. They will not share data."

The company said it would "share more info on capabilities and our data policies when we reveal the product." The Ray-Ban smart glasses are expected to get launched later this year.