According to The Verge, SpaceX's VP of Starlink and commercial Sales Jonathan Hofeller said the company is already in talks with "several" airlines. 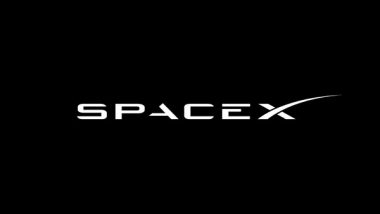 Washington, June 11: American aerospace conglomerate, SpaceX is working on making its satellite internet network Starlink a provider of that coveted fast in-flight internet connectivity. According to The Verge, SpaceX's VP of Starlink and commercial Sales Jonathan Hofeller said the company is already in talks with "several" airlines.

"We have our own aviation product in development...we've already done some demonstrations to date, and looking to get that product finalized to be put on aircraft in the very near future," Hofeller said at a panel at the Connected Aviation Intelligence Summit on Wednesday, Astronaut Thomas Pesquet Captures Stunning Shot of the SpaceX Falcon 9 Rocket During His Journey to the ISS, Can You Spot It? (See Pic).

Starlink is currently offered as a beta service in select areas, mostly in the U.S. and Canada, for USD 99 per month, after a one-time SUD 499 equipment fee. The company currently has about 1,800 satellites in orbit and is steadily launching new batches, with the goal of reaching "near-global coverage" in 2021.

However, airline connectivity is a bit of a different beast, as it cannot always rely on ground stations, for example, when the airplane is flying over the ocean. To provide connectivity there, Starlink's satellites will have to be able to connect to each other using laser links.

Hofeller said this will be possible on the next generation of Starlink's constellation, which is currently being developed. In-flight Wi-Fi is notoriously pricy, and typically quite slow. Hofeller said that Starlink will be able to provide a "great experience," something which current, geostationary systems cannot do. However, he did not say when, exactly, this could launch. "To be determined [...] Hopefully sooner rather than later," he said.

As per The Verge, notably, Ben Griffin, VP of mobility services for Starlink's competitor OneWeb, was also there at the panel, and he said the company is targeting a similar service in the "middle part of next year, maybe sooner."