Fifty-seven people have been presumed dead as boat carrying migrants has capsized off Libya, as per United Nations migration official. 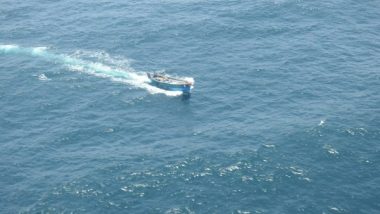 Safa Msehli, a spokesperson for the International Organization for Migration, said the boat left the western coastal town of Khums on Sunday. There were at least 75 people on board, reported Al Jazeera.

Eighteen people from the vessel were rescued and returned to shore on Monday, Msehli said.

The survivors, who are from Nigeria, Ghana and Gambia, reported the vessel had stopped due to an engine problem, then capsized amid bad weather, Msehli said.

"According to survivors brought to shore by fishermen and the coast guard, at least 20 women and two children were among those who drowned," Msehli wrote on Twitter.

The capsizing is the latest disaster in the Mediterranean Sea involving migrants and refugees seeking a better life in Europe, said Al Jazeera further.

Monday's deaths came less than a week after some 20 people also drowned in the Mediterranean Sea, while 500 were intercepted and taken back to Libya.

There has been a spike in crossings and attempted crossings from Libya in recent months.

Almost 15,000 refugees, asylum seekers and migrants have been intercepted by the EU-backed Libyan coastguard in the first half of this year, which the United Nations said was more than those who disembarked in all of 2020.

Amnesty International has said that in the first six months of this year, more than 7,000 people intercepted at sea were forcibly returned to detention camps in Libya.

Libya has become a major transit route for people trying to reach Europe by boat since chaos erupted after the 2011 revolt that toppled longtime leader Muammar Gaddafi, it reported further. (ANI)