Israel-Palestine Conflict: At Least 65 Killed in Gaza, 7 in Israel As Hamas Launches New Barrage of Airstrikes

The ongoing violence between Israel and Palestine marks a dramatic escalation of tensions linked to the potential eviction of Palestinian families from East Jerusalem by Israeli settlers and access to one of the most sacred sites in the city, which is a key hub for Islam, Judaism and Christianity. 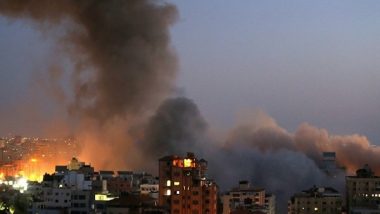 Gaza, May 13: Amid the deepening unrest between Israel and Palestine, the death toll in Gaza has reached 65, and 7 in Israel as the Hamas group launched a new barrage of airstrikes. Al Jazeera reported that heavy bombardment on the Gaza Strip continued, killing Hamas Gaza City commander, Bassem Issa, in one of the Israeli airstrikes along with our senior members, the Hamas group confirmed.

The death toll in Gaza rose to 65 Palestinians, including 16 children and five women, according to Gaza's Health Ministry. At least 365 people have been wounded, including 86 children and 39 women.

Meanwhile, a five-year-old boy was killed and at least 20 Israelis were hurt as Gaza launched a fresh spade of rocket attacks that set off warning sirens in the Tel Aviv metropolitan area and cities in the south on Wednesday night, reported The Times of Israel. Israeli Airstrikes Bring Down Most of High-Rise Building in Central Gaza.

With the boy's death, the number of fatalities has reached seven, including five Israeli civilians, an Indian national and an IDF soldier killed by anti-tank missile fire on the Gaza border.

According to the Israeli army, 180 rockets were fired at Israel since 6 a.m. on Wednesday, of which 40 fell in Gaza. In response to the rocket fire, the IDF launched strikes on upwards of 500 targets in the Gaza Strip, aimed at Hamas personnel, weaponry and infrastructure throughout the enclave

The Israeli police have said that 374 people have been arrested so far tonight in rioting throughout the country, with 36 cops hurt during events, reported The Times of Israel.

The ongoing violence between Israel and Palestine marks a dramatic escalation of tensions linked to the potential eviction of Palestinian families from East Jerusalem by Israeli settlers and access to one of the most sacred sites in the city, which is a key hub for Islam, Judaism and Christianity.

A senior Hamas official on Wednesday said the terror organisation is ready to end the current intensive fighting with Israel, the Times of Israel reported citing the Russian foreign ministry's statement. Deputy Chairman of the Hamas political bureau conditioned it on Israel halting strikes and on the international community pressuring the Jewish state to end "military actions" at the Al-Aqsa Mosque on the Temple Mount.

Tensions between Israel and Palestine are rapidly rising with the ramping up of rocket attacks and the United Nations has warned that the conflict is moving towards a 'full-scale war'. Israel-Palestine Conflict: India Deeply Concerned at Violence in Jerusalem's Temple Mount, Evictions in Sheikh Jarrah & Silwan Neighbourhoods.

United Nations Special Coordinator for the Middle East, Tor Wennesland, called on both sides to de-escalate tensions the day before. "Stop the fire immediately. We are escalating towards a full scale war. Leaders on all sides have to take the responsibility of de-escalation. The cost of war in Gaza is devastating and is being paid by ordinary people. The UN is working with all sides to restore calm. Stop the violence now," he tweeted.