Bush on Tuesday ahead of his announcement that he intended to withdraw US troops from Afghanistan. 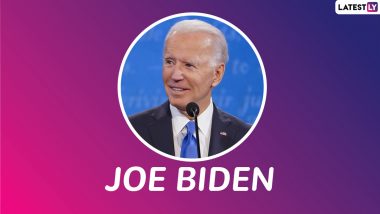 Washington [US], April 15: US President Joe Biden spoke to former President George W. Bush on Tuesday ahead of his announcement that he intended to withdraw US troops from Afghanistan.

"I spoke yesterday with President Bush to inform him of my decision. While he and I have had many disagreements over policies throughout the years, we're absolutely united in our respect and support for the valor, courage, and integrity of the women and men of the United States Armed Forces who served," Biden said during his remarks announcing the troops' withdrawal from Afghanistan on Wednesday (local time).

"I'm immensely grateful for the bravery and backbone that they have shown through nearly two decades of combat deployments. We as a nation are forever indebted to them and to their families," he added.

According to The Hill, the White House said that Biden also called former President Barack Obama the day before he announced the decision.

Biden delivered his remarks in the Treaty Room of the White House, the same room where Bush announced in 2001 the first airstrikes in Afghanistan in the aftermath of the September 11 attacks, as reported by the American news outlet. Joe Biden to Withdraw All US Troops From Afghanistan by September 11, 2021, Says Report.

In arguing for pulling U.S. forces out of Afghanistan and ending America's longest war, Biden said the events of 9/11 "cannot explain why we should remain there in 2021."

"We cannot continue the cycle of extending or expanding our military presence in Afghanistan hoping to create the ideal conditions for our withdrawal, expecting a different result," Biden said.

Biden said that the United States will start its final withdrawal of troops from Afghanistan on May 1 and complete its pullout ahead of the 20th anniversary of the September 11 terrorist attacks.

"The United States will begin our final withdrawal beginning on May 1 this year," Biden said as he delivered his remarks on the "Way Forward in Afghanistan."

"US troops, as well as forces deployed by our NATO allies and operational partners, will be out of Afghanistan before we mark the 20th anniversary of the heinous attack on September 11 but we will not take our eyes off the terrorist threat," he added.

Biden said the US will use all tools at its disposal to respond to any potential Taliban attack on US forces or partners.

Former Presidents Obama and Donald Trump both pledged during their time in office to get US troops out of Afghanistan but were unable to follow through.

Trump's administration negotiated an agreement with Taliban and Afghanistan leaders stating the US would withdraw its forces by May 1. Biden said he would be unable to meet that commitment, but that the US would begin to wind down its presence May 1, with the goal of having American personnel out of the country fully by September 11.

Meanwhile, the Taliban have rejected the United States' plan to restore peace in Afghanistan as well as the proposed six-month delay in the withdrawal of the American troops.

Taliban's spokesperson Mohammad Naeem Wardak on Tuesday had said that the movement would refrain from taking part in any conference until foreign military presence in Afghanistan is ended.

"Until all foreign forces completely withdraw from our homeland, the Islamic Emirate will not participate in any conference that shall make decisions about Afghanistan," Wardak tweeted. (ANI)

Comments
Tags:
Barak Obama George W Bush Joe Biden US president US troops in Afghanistan
Comments
You might also like