Get latest articles and stories on World at LatestLY. French President Emmanuel Macron has announced that he will visit the United Arab Emirates to mourn the death of President Sheikh Khalifa bin Zayed al Nahyan and will display his support for the ruling family. 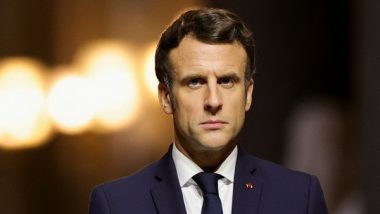 Dubai [UAE], May 14 (ANI): French President Emmanuel Macron has announced that he will visit the United Arab Emirates to mourn the death of President Sheikh Khalifa bin Zayed al Nahyan and will display his support for the ruling family.

French President will travel to UAE on Sunday to pay tribute to President Sheikh Khalifa, who died on Friday and "express his support to his brother Sheikh Mohamed bin Zayed Al Nahyan and the rest of the family, and the entire Emirati people," Khaleej Times reported citing the statement issued by France administration.

Sheikh Khalifa Al Nahyan served as the president of the UAE and Ruler of Abu Dhabi since November 2004, was buried and funeral prayers were held on Friday. Major oil producer UAE is seen by France as a strategic partner in the region, and business ties, which include the delivery of military equipment and energy infrastructure, have been reinforced under Macron's first presidential term.

During a high-profile visit to Dubai in November, Macron displayed a good relationship with the new President Sheikh Mohamed, who on Saturday was elected as President of the UAE. Business delegations from both states signed a series of major deals, Khaleej Times reported.

To mark the respect to UAE President, India has declared one day's state mourning throughout the country.

The Ministry of Home Affairs (MHA) said National Flag will be flown at half-mast on Saturday throughout India on all buildings where the National Flag is flown regularly.

"His Highness Sheikh Khalifa Bin Zayed Al Nahyan, President of the United Arab Emirates and Ruler of Abu Dhabi has passed away. As a mark of respect to the departed dignitary, the Government of India has decided that there will be one day's State Mourning tomorrow throughout India," the MHA said.

Born in 1948, Sheikh Khalifa was the second President of the UAE and the 16th Ruler of Abu Dhabi. (ANI)