"President Ghani, let me just say that the country that will be most affected by turmoil in Afghanistan is Pakistan. Pakistan suffered 70,000 casualties in the last 15 years. The last thing Pakistan wants is more conflict," he added. 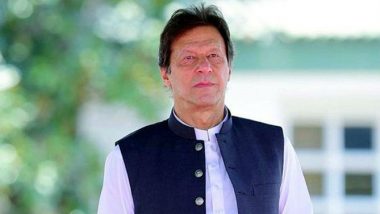 Speaking at the International Conference on South Asia-Central Asia Regional Connectivity-Challenges and Opportunities in Tashkent, Imran Khan said, "To blame Pakistan for what is going on in Afghanistan and Taliban is not fair," he said.

Imran Khan said Pakistan was a partner in peace and that regional peace and stability were of utmost importance for enhanced trade and economic cooperation in the region. Taliban Issues Diktat Asking Local Religious Leaders for List of Girls Above 15, Widows Under 45 To Be Married to Their Fighters: Reports.

"Afghanistan is natural land bridge between Central Asia and South Asia, and peace in Afghanistan is the most critical factor for regional connectivity," he said. Imran Khan said that Pakistan's foremost priority is stability in Afghanistan as it directly affects the country.

"Pakistan will continue to support all initiatives for peace and reconciliation in Afghanistan," he said. "President Ghani, let me just say that the country that will be most affected by turmoil in Afghanistan is Pakistan. Pakistan suffered 70,000 casualties in the last 15 years. The last thing Pakistan wants is more conflict," he added.

The Pakistan Prime Minister talked about the economic loss Pakistan faced due to the unrest in Afghanistan. Khan said Pakistan's economy was finally recovering after going through a difficult phase. "I repeat, the last thing we want is turbulence in Afghanistan."

He claimed that no country has tried harder than Pakistan to bring the Taliban to the table for dialogue. "We have made every effort, short of taking military action against the Taliban in Pakistan, to get them on the dialogue table and to have a peaceful settlement [in Afghanistan].

He said that he would not have visited Kabul in November last year if Pakistan was not interested in peace. "The whole idea was to look upon Pakistan as a partner in peace. I feel disappointed that we have been blamed for what is going on in Afghanistan".

Ghani had said at the conference that contrary to repeated assurances by Prime Minister Khan and his generals, networks and organizations are supporting the Taliban and are openly celebrating the destruction of the assets and capabilities of the Afghan people and State. Pakistan Giving Air Support to Taliban, Threatens To Hit Back If Afghan Forces Try To Retake Spin Boldak Border Town.

He said there were assurances from Pakistan that it does not find a Taliban takeover in Afghanistan in Islamabad's interests and short of use of force, will use its power and influence to make the Taliban negotiate seriously.

Ghani said intelligence estimates indicate the influx of over 10,000 Jihadi fighters from Pakistan and other places in the past month as well as support from their affiliates in the transnational terrorist organizations. There is a consensus among credible international observers that they have not taken any steps to sever their relationships with terrorist organizations, Ghani said.